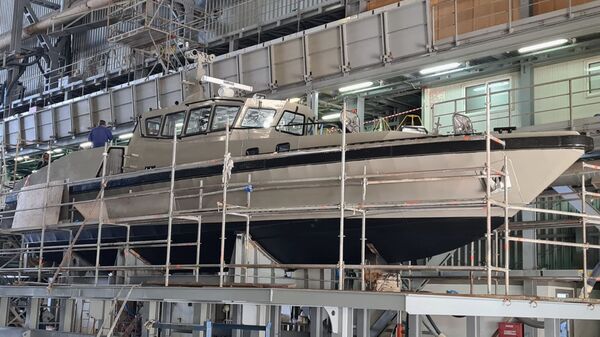 Agenor was built with funding provided by the Hellenic Navy. (Dimitrios Mitsopoulos)

Hellenic Shipyards is preparing to hand over the first domestically designed and built special operations craft (SOC) to the Hellenic Navy in the coming weeks, the shipbuilder has told Janes.

The new vessel, named Agenor, was built with funding provided by the Hellenic Navy. It was launched on 30 July and is currently completing sea trials.

The SOC is based on a design provided by Navinco featuring a deep V-shaped hull manufactured from aluminium alloy, which was donated by ElvalHalcor. Displacing 22 tonnes, the craft has an overall length of 17.60 m, a beam of 4.20 m and a draught of 0.95 m. It is powered by two 1,200 hp MAN V8 engines providing a cruise speed of 35 kt and a top speed of more than 45 kt at full load. It can carry a maximum payload of 4.5 tonnes.

The propulsion system, supplied by New Zealand manufacturer Q-SPD, includes QSD236 drive systems with surface piercing propellers, drive shafts, a full steering system and a fully integrated exhaust system. The vessel is designed to operate out to a maximum range of up to 350 n miles in Sea State 4, depending on payload.

Agenor can be optionally fitted with the Scytalys M²IMS tactical mission system, which integrates datalinks and software-defined radios to create a common operational picture beyond the platform's own sensors.

Hellenic Shipyards is preparing to hand over the first domestically designed and built special opera...