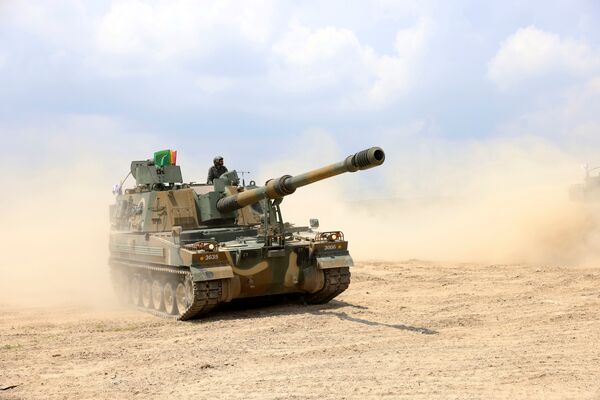 Hanwha is looking at merging its defence businesses to ‘enhance corporate value', the company told Janes . These businesses include Hanwha Defense, manufacturer of the K9 self-propelled howitzer (pictured above). (Hanwha Defense)

South Korea's Hanwha Group is considering a merger of its various defence businesses to enhance efficiencies and productivity, the corporation told Janes on 25 July.

A spokesperson for the company said, “The company is considering various measures including [the creation of a new] defence sector division and a merger of related companies to enhance corporate value.”

“But nothing has been confirmed so far. We will announce details within one month or when [the restructure] is decided,” the spokesperson added.

Janes understands that options under consideration include Hanwha Aerospace absorbing the defence division of the Hanwha Corporation. However, the spokesperson did not confirm this at the time of publication.

Hanwha's defence activities are led mainly by Hanwha Aerospace, which manufactures engines and military aerospace parts. Hanwha Aerospace is also the parent of Hanwha Defense and Hanwha Systems, which produce a range of military land platforms and electronics, respectively.

In 2021 Hanwha Aerospace reported sales of KRW6.4 trillion (USD4.8 billion), a year-on-year growth of 20%. This includes non-defence sales through other subsidiary companies. The defence business of Hanwha Corporation reported sales of KRW808.3 billion in 2021, a decline of 5%.

Janes understands that Hanwha has been weighing up the benefits of consolidating its defence firms for some time but has been waiting for an optimum time to proceed with the plan.

South Korea's Hanwha Group is considering a merger of its various defence businesses to enhance effi...