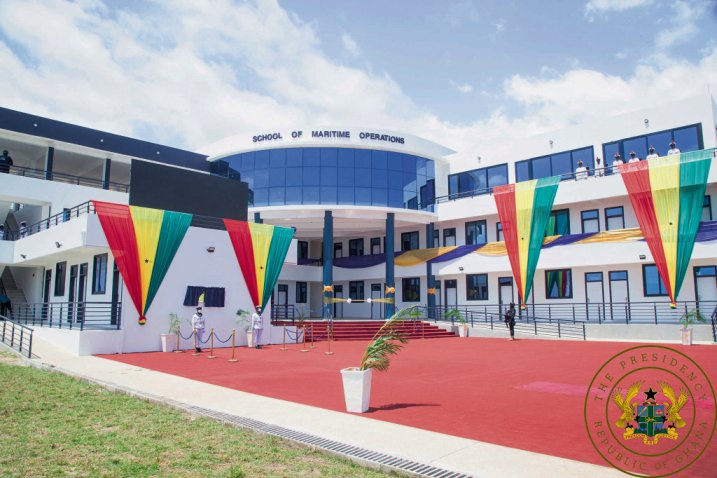 The new School of Maritime Operations at the Navtrac complex. (The President of the Republic of Ghana)

“The establishment of this ultra-modern training facility is one of the most important decisions taken by government, through the Ministry of Defence and the Military High Command,” the president said during the opening on 20 October.

The new facility is located at the site of a defunct fruit processing factory on the eastern bank of the Volta estuary in the South Tongu District of Volta Region.

In his televised speech, Chief of the Navy Staff Rear Admiral Seth Amoama explained how this location “offers opportunity for waterborne training on the river and easy access for training boats to sail out to the open sea, along the same concept as the Britannia Royal Naval College in Dartmouth, UK, where most Ghanaian naval offices were trained”.

The initial development consisted of a floating jetty, obstacle course, recruit accommodation, and dining facility and began training in 2016, with the first recruits graduating the following year.

Ghana’s President Nana Akufo-Addo attended a ceremony to mark the start of construction of a new nav...

The huge increase in the sale and transport of waste plastic has created lucrative and varied opport...