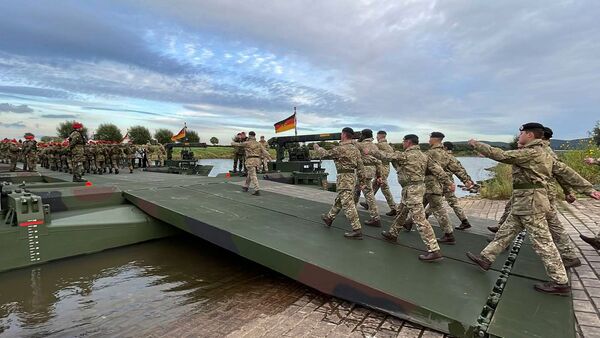 The British Army said on its website on 4 October that the new battalion is primarily amphibious-focused but also has other engineering capabilities. The German Army pointed out on its website on 1 October that it and the British Army are the only NATO militaries that operate the M3 amphibious bridge and ferry system. During the stand-up ceremony, the new battalion built a bridge formed of three German and three UK M3s.

Speaking at the ceremony, UK Chief of the General Staff General Mark Carleton-Smith said, “The changes in our Integrated and Security Review mean that the British Army will be designed to operate globally on a permanent basis and forming land regional hubs. These hubs will enable the army to be more actively and persistently engaged across the globe, including in Europe, where we continue to have a leading role in European defence and security. Forward Holding Base Sennelager is the nexus through which the UK brings together armoured warfighting capability, world-class strategic planning, and logistics, enabling persistent engagement across Europe. In practice, this will mean deploying more of our troops more often, for longer periods, both with NATO and alongside our wider networks of allies and partners, building credible deterrence across the alliance.”