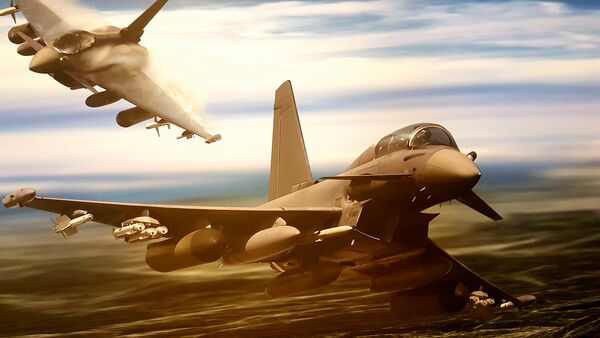 An artist's impression of the Eurofighter ECR aircraft, development of which will now proceed following a German government decision announced on 14 March. (Airbus via Janes/Gareth Jennings)

Germany's Tornado replacement announcement on 14 March has paved the way for Airbus to formally launch the development of the Eurofighter Electronic Combat Role (ECR) platform that it first touted in 2019.

In announcing its intent to satisfy the Luftwaffe's future fighter requirements with the Lockheed Martin F-35A Lightning II Joint Strike Fighter and an ‘electronic combat role' Eurofighter, Berlin has effectively given the green light to Airbus Defence and Space (DS) to proceed with the ECR project.

”The Eurofighter will also be retained for the armed forces and will be further developed for the electronic combat role,” the Bundeswehr said. Airbus DS CEO Michael Schoellhorn added, “[This is an] important decision by the Bundeswehr to replace the Tornado in the electronic warfare variant with new Eurofighter jets. It's a key technological evolution that will reinforce the role of Eurofighter as [the] backbone of Germany's air force fighter fleet until 2060.”

Eurofighter stakeholder Airbus first touted a dedicated electronic attack (EA) version of the aircraft at the IQPC International Fighter conference in Berlin in November 2019. At that time, the Eurofighter ECR was billed as being the escort jammer component of a system-of-systems designed to provide a comprehensive EA capability, with the other elements of the system being a stand-off jammer aircraft and stand-in jammer effectors.

Germany's Tornado replacement announcement on 14 March has paved the way for Airbus to formally laun...