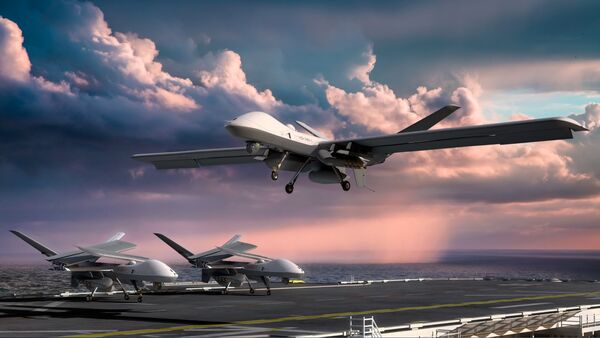 General Atomics Aeronautical Systems, Inc (GA-ASI) said on 10 May that it is developing a kit to provide short take-off and landing (STOL) capability on its MQ-9B SkyGuardian and SeaGuardian unmanned aerial systems (UASs).

The MQ-9B STOL option will utilise a wing and tail kit that can be installed on the platform in the hanger or on a flight line in less than a day, according to the company. The kit can be removed to return the aircraft to conventional operations.

“Imagine taking the hardtop off your Jeep. You lift it off, stow it in your garage, and now you've got an open vehicle. If it rains, you put the hardtop back on. We're the same. Take a standard MQ-9B, put the STOL kit on, and then go fly,” said GA-ASI president David Alexander in a statement.

The unmanned aerial vehicle's (UAV's) endurance will be affected by the STOL capability. GA-ASI expectsan “approximately 50 per cent drop” in endurance between the MQ-9B and MQ-9B STOL when payloads are kept equal. “However, the options for launching, recovering, and basing the aircraft are radically increased, changing the value for many missions,” C Mark Brinkley, a spokesman for GA-ASI, told Janes via email.

The kit is in development following the testing of STOL capability on a modified Gray Eagle Extended Range UAV in 2021, GA-ASI said. The Mojave STOL prototype has been able to launch and recover in less than 300 ft during tests.

General Atomics Aeronautical Systems, Inc (GA-ASI) said on 10 May that it is developing a kit to pro...