General Dynamics Land Systems (GDLS) is continuing to develop its Tracked Robot 10-Ton (TRX) by testing it out for the US Army at different events in preparation for the service’s 2022 robotic combat vehicle (RCV) soldier experiment.

In the latter half of 2020 the company unveiled the TRX and billed it as a potential competitor for an army RCV-Medium (RCV-M) competition. In the intervening time, GDLS has continued developing the tracked, flattop unmanned ground vehicle, and in February and March demonstrated it at the Army Expeditionary Warrior Experiment at Fort Benning, Georgia.

“This was our first demonstration in a relevant environment with the TRX,” the company’s US director of business development Tim Reese told Janes on 24 March.

Unlike last year when TRX donned AeroVironment’s new Switchblade 600 loitering weapon system, the weapon system for this event was removed and the robot was used for tactical resupply missions and to test out three ways of operating the vehicle: remote control, waypoint navigation, and the system’s ‘follow-me’ mode of operation.

“It had a package of standard DoD cargo containers on it that they use in different scenarios,” Reese said. “It was [for] dismounted soldiers so it was delivering supplies or picking up equipment from these units at different points in their tactical scenarios during the exercise.”

Based on this field experiment, GDLS is improving several vehicle items including its suspension system, how its lights work, and refining how the cargo is mounted on top of the platform, he explained. 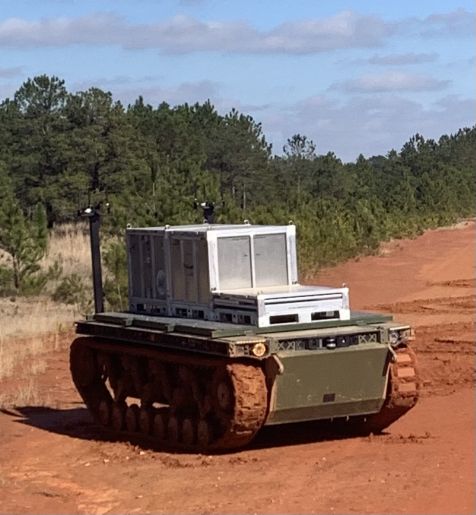