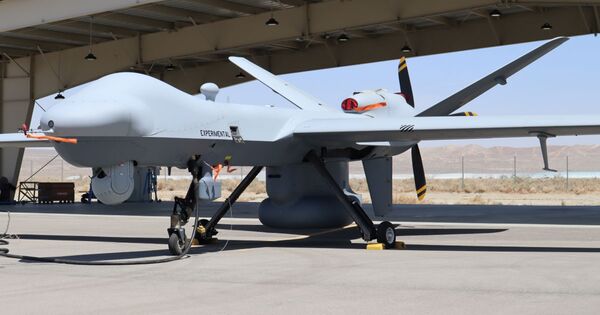 The Leonardo Seaspray AESA radar is housed in an underfuselage pod for both the MQ-9A test aircraft (pictured) and the MQ-9B SeaGuardian UAV. (GA-ASI)

The flight of the unmanned aerial vehicle (UAV) took place on 14 April, ahead of the eventual integration of the radar aboard the GA-ASI MQ-9B SeaGuardian (the maritime variant of the SkyGuardian).

This sensor suite, augmented by automatic track correlation and anomaly-detection algorithms, will enable real-time detection and identification of surface vessels over thousands of square nautical miles, GA-ASI had earlier said, adding that Leonardo's patented small-target detection capability will enable the radar to spot extremely difficult targets, such as submarine periscopes and shipwrecked individuals, at long range and in very stormy seas.