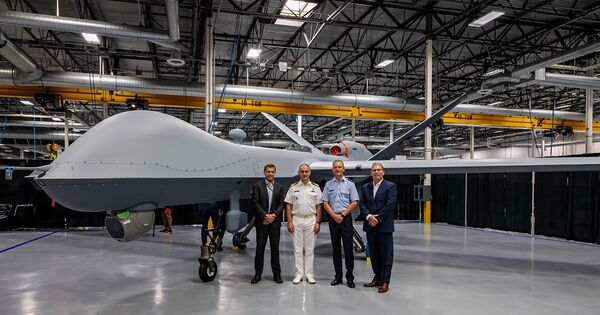 The first of four MQ-9A Reaper UAVs for the Netherlands was delivered on 7 July. (GA-ASI)

The event on 7 July , which was attended by senior industry and military officials, saw the formal handover to the Royal Netherlands Air Force (RNLAF) of one Block 5-standard Reaper (serial M001) and a ground control station (GCS).

This handover comes about six-and-a-half years after the US State Department cleared the sale of four Reaper UAVs and four GCSs to the Netherlands in February 2015. As well as the equipment, the approval also covered training and a three-year (3,400 flight hours) support package. The total value of the sale was estimated to be USD339 million.

At about the same time that approval was granted, the RNLAF began training its personnel in the use of the Reaper. On 2 February 2015, Janes reported the arrival of Dutch military personnel at Holloman Air Force Base in New Mexico for training.

However, owing to budget cuts the programme was delayed to the extent that deliveries are just now getting under way. Once deliveries to the Netherlands are complete, the Reapers will be operated by 306 Squadron out of Leeuwarden Air Force Base. As previously reported, the Dutch will not arm its Reapers.