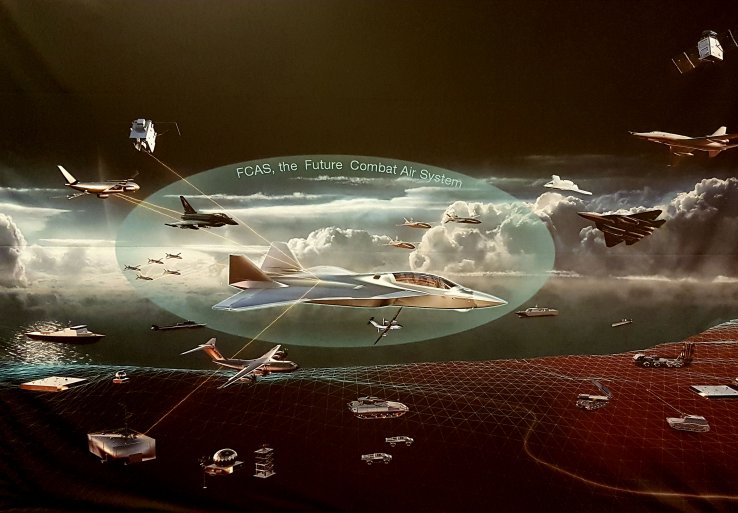 The FCAS ‘system of systems’ concept, for which the German FCMS consortium is developing sensors alongside Indra of Spain and Thales of France. (Airbus via Janes/Gareth Jennings)

On 3 November the FCMS consortium of Hensoldt, Diehl Defence, ESG, and Rohde & Schwarz reported good overall progress in its efforts to develop the future suite of FCAS sensors alongside its Spanish partner Indra and France’s Thales. In particular, it noted advancements in developing what it termed the 4π Meta Sensor Effector System (MSES).

“The FCMS experts [have] provided both a clear, forward-looking overview of the technological challenges, such as the 4π MSES, where 4π describes the complete volume of sensor space around the platforms as well as the effectors. Also well received [at recent briefings], some important insights into the operational requirements for the future system of systems from the perspective of an experienced fighter pilot,” FCMS said.

On its website, FCMS describes 4π MSES as enabling “the rapid orchestration in the integrated sensor-effector network, not only as a counterpoint to the ground-based enemy air-defence networks, but also to expected [airborne threats to the] FCAS and Next-Generation Weapon System (NGWS). In many cases, individual sensors and effectors will have to perform several tasks in parallel, for example, on the basis of multifunctionality. Electronically scanned [radar] systems or distributed apertures of passive sensor systems that can perform several tasks synchronously, for example, by means of electronic beam control and suitable resource management, pave the way for this.”

Germany’s Future Combat Mission System (FCMS) consortium has charted the progress being made in deve...