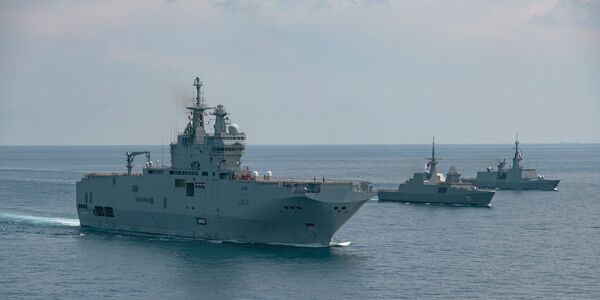 The French Navy and the Republic of Singapore Air Force (RSAF) have further improved their interoperability after conducting the deck landing of the latter's Super Puma helicopters on the French Navy's Mistral-class landing helicopter dock (LHD) Tonnerre .

The defence mission of the Embassy of France in Singapore told Janes that the landings, which took place while Tonnerre was in Singapore in late May 2021, were the first to be conducted between the RSAF and the LHD.

Besides the deck landings, Tonnerre also took part in a passage exercise with the Republic of Singapore Navy's (RSN's) Formidable-class frigate, RSS Steadfast (70).

“The training with the Singaporean Navy and the Republic of Singapore Air Force contributed to improve our interoperability,” said Captain (Navy) Arnaud Tranchant, Tonnerre 's commanding officer. “It was also a great opportunity for our cadets to learn how to work in a multinational context,” he added.

Tonnerre was in Singapore as part of the French Navy's annual deployment known as ‘Mission Jeanne d'Arc'.

Besides the training of cadets, the five-month mission also aims to improve the French Navy's ability to operate with the navies of partner countries across the Asia-Pacific region. Tonnerre was accompanied by the La Fayette-class frigate, Surcouf , while it was in Singapore.

The French Navy and the Republic of Singapore Air Force (RSAF) have further improved their interoper...