The French Armed Forces Ministry provided elements of the roadmap for its medium-altitude, long-endurance (MALE) unmanned aerial vehicles (UAVs) during a press briefing on 17 June at Cognac Air Base 709, where France's Reaper UAVs are based.

The three Reaper Block 5 UAVs deployed in Mali will be armed with GBU-12 laser-guided bombs in July, according to Commander Mickaël, operations chief of the 33e Escadre de Surveillance, de Reconnaissance et d'Attaque (33rd Surveillance, Reconnaissance and Attack Wing, ESRA), formerly a Mirage F1CR combat aircraft wing. “Other weapons” (Hellfire missiles and GBU-49s) will be operational “at the end of the year”.

The Reaper Block 5's first flight in Mali took place on 25 March, and as already reported by Janes, its first operational flight was on 14 May. 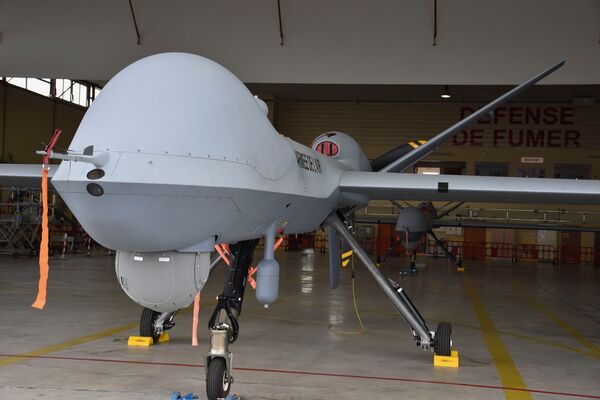 Two of the six Reaper Block 5 UAVs delivered to the French Air Force in 2020, seen at Cognac airbase on 17 June. Another three operate in Niger, while the sixth is flying in weapons qualification tests in the US. (Jean-Marc Tanguy)

Airbase commander Colonel Nicolas Lyautey said new buildings will be available in 2026 to accommodate the 33rd ESRA, with hangars that can fit the future European MALE Remotely Piloted Aircraft System (RPAS). The 33rd ESRA now has 30 crews and 120 mechanics, for a total of 12 Reapers (six Block 1 and six Block 5). The European MALE RPAS will be delivered to Cognac in 2029, he added.

The French Armed Forces Ministry provided elements of the roadmap for its medium-altitude, long-endu...

A task force of Chinese naval ships was monitored by the US Coast Guard as it sailed in waters off t...

DSEI 2021: British Army battlegroups to dwell in Kenya and Oman

British Army battlegroups are to spend extended periods on deployment in Kenya and Oman from later t...
Request Consultation