Two Lockheed Martin KC-130J Super Hercules tankers are operational with the French Air Force, meaning France now has its own mid-air refuelling capability for its Airbus H225 Caracal helicopters and is part of the small club of countries that can conduct long-range helicopter operations.

The two KC-130Js operated by the French Air Force were delivered, respectively, in late 2019 and early 2020. The aircraft were ordered in 2015 from the United States via a Foreign Military Sales process along with two C-130J-30s. France has been operating the C-130H Hercules since 1987. The fleet comprises 14 C-130H and C-130H-30 aircraft based in Orleans. 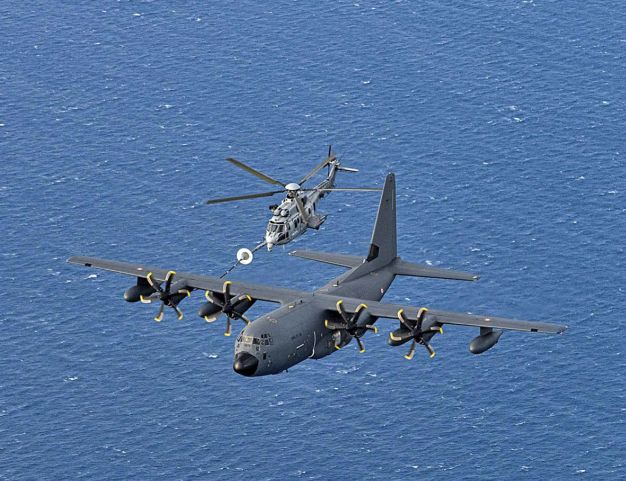 The KC-130J and the Caracal are soon to be cleared for air-to-air refuelling operations. (French Air Force)

The decision to acquire the C-130J and KC-130J was motivated by the fact that the C-160 Transall, which has been France’s main tactical transport aircraft for decades, was being phased out (only a dozen are still in service), unsatisfactory availability of the C-130Hs at the time, and delays in the delivery of the Airbus A400Ms.

Since 2006, Armee de l’Air has been operating 10 H225M Caracal helicopters equipped with mid-air refuelling probes. This system allows up to 10 hours of flight time. The Caracal was originally acquired to conduct mainly combat search-and-rescue missions, giving the air force a capability to recover its downed pilots behind enemy lines.