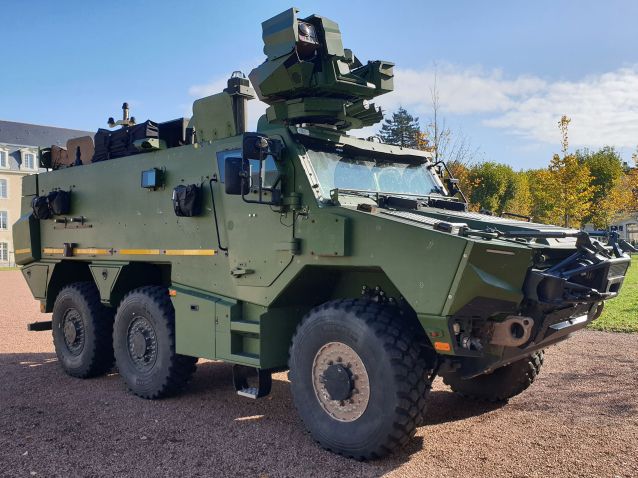 The photographs were also shared on Facebook by the 6e Régiment du Génie (6th Engineering Regiment), also based in Angers.

The Griffon Génie prototype was officially presented to the staff, trainees, and cadets of the school by members of the Séction Technique de L’Armée de Terre (Army Technical Section, STAT).

The vehicle displayed has a similar outward appearance to the troop carrier version, with a few notable additions, including a towing winch fitted to the front of the engine bay and a trailer towing hook at the rear of the chassis. Like the Véhicule de l’Avant Blindé (VAB) Génie it is intended to replace, the Griffon Génie is designed to be fitted with six specific-to-role kits, including urban area support, mobility support, emergency deployment support, mine clearance and pollution control, counter mobility, and explosive ordnance disposal (EOD).

The Griffon Génie will be fitted with a Hornet remote weapon system and a Metravib Pilar V acoustic shot sensor, as is standard for the Griffon. It will equip combat engineer groups as well as more specialised units such as EOD, engineering combat diver, and operational search and investigation teams.

It is also likely that the Griffon Génie will replace the Aravis mine-resistant, ambush-protected vehicle in service with EOD teams of the 13e Régiment du Génie (13th Engineering Regiment) acquired as an urgent operational requirement in 2009 and subsequently deployed in Afghanistan and Mali.

The cost of the Leclerc XL main battle tank upgrade programme could increase significantly due to ye...

The budget committee of the Bundestag, the German parliament, approved nearly EUR1 billion (USD1.1 b...