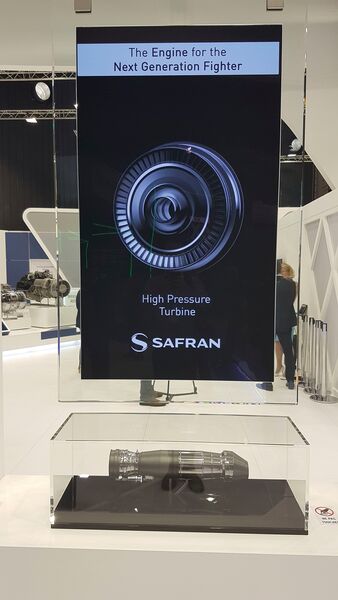 A model of the Next European Fighter Engine/New European Engine being developed by Safran, MTU, and ITP for the FCAS/SCAF New Generation Fighter displayed at the Paris Air Show 2019. (Janes/Gareth Jennings)

France has undertaken trials of a prototype engine for the New Generation Fighter (NGF) it is developing with Germany and Spain as part of the wider Future Combat Air System (FCAS)/Système de Combat Aérien Futur (SCAF).

The French defence procurement agency announced on 10 January that it had successfully completed a ground test of a prototype engine under the Turenne programme, using a powerplant derived from the Snecma M88 as currently fitted to the Dassault Rafale combat aircraft.

“At the end of 2021, the Directorate General of Armaments [DGA] completed a major test for the development of the next engine of the [NGF] combat aircraft of the [FCAS/]SCAF. As part of the Turenne defence technology project led by the DGA, a prototype derived from the engine of the Rafale fighter jet was tested on the test bench”, the DGA said.

The Turenne programme to develop a powerplant for the NGF was launched in 2015, with the first five-year phase devoted to the creation, testing, and production of a new turbine concept using scalable digital modelling, 3D digital simulations, digital design of new metal alloys, and prototyping in additive manufacturing. Thesecond phase, started in 2019, makes it possible to test the prototype in the field using the Thermocolor technique, with the objective of comparing the heat mapping obtained in reality with the data of the simulations carried out digitally in the first phase.

France has undertaken trials of a prototype engine for the New Generation Fighter (NGF) it is develo...