The French defence procurement agency Direction Générale de l’Armement (DGA) has signed a contract with Thales and Thales Alenia Space to conduct a concept study regarding intelligence, surveillance, and reconnaissance (ISR) applications for a Stratobus-type platform, Thales announced on 8 January. 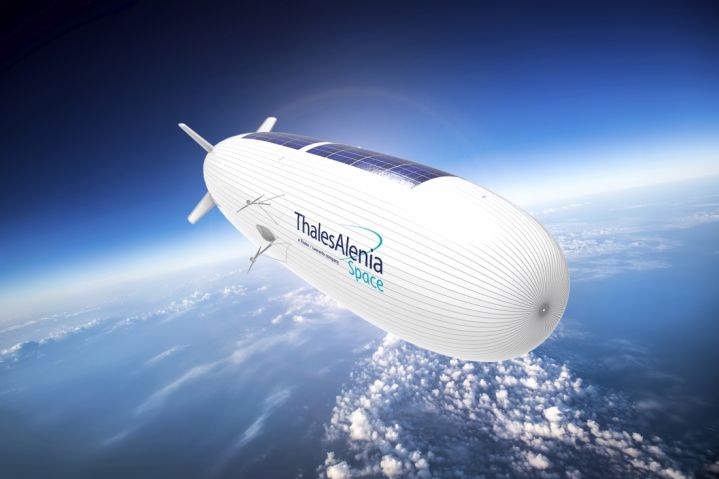 A concept of the Stratobus type platform that Thales is to develop into a HAPS platform for the French military. (Thales)

Stratobus is a stratospheric airship high altitude pseudo satellite (HAPS) designed by Thales and Thales Alenia Space. It is intended to fly at an altitude of more than 65,500 ft. Stratobus can be used for different missions including ISR and communications both for civilian and military purposes.

The study launched by DGA will include an operational concept study for an ISR mission including exercises simulating its use in theatres of operation. A full-scale demonstrator concept will also be studied.

The Stratobus concept was first introduced by Thales in 2014 during its innovation days. The programme was formally launched in 2016 with funding partners CGI/Bpifrance (organisations supporting French Investment in future programs). In flight demonstrations are planned by the end of 2023.

The original Stratobus concept presented by Thales is for a 115 m long and weighs nearly 7 tonnes. In standard configuration it can carry 250 kg of payload with a power rating of 5 kW. For specific missions at the equator, the platform’s payload capacity could reach 450 kg and a rating of 8 kW. According to Thales Stratobus is designed for five-year missions with annual servicing. The Stratobus will have 1,000 m² of photovoltaic cells to provide the power needed for its four electric motors, energy storage system, and mission payload. The Stratobus is designed to remain stationary and withstand winds up to 90 km/h.

Boeing has been contracted to begin low-rate initial production (LRIP) of the Eagle Passive/Active W...