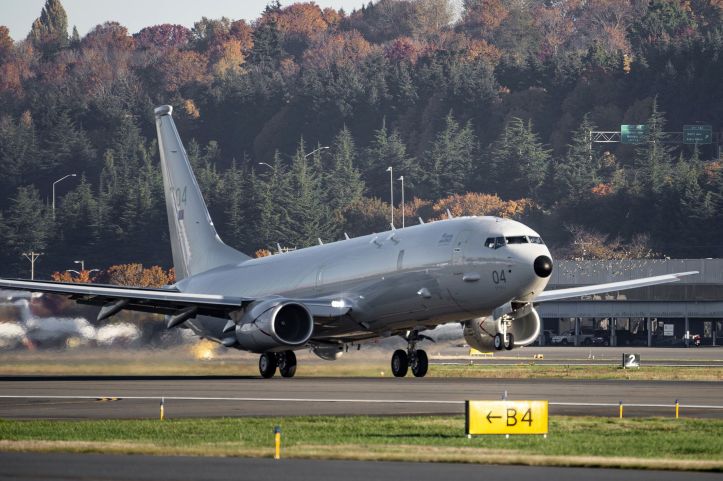 The fourth of nine Boeing P-8A Poseidon MRA1 maritime multimission aircraft (MMA) for the Royal Air Force departs from Boeing Field in the United States for the United Kingdom on 3 November 2020. (Boeing)

Aircraft ZP804, named ‘Spirit of Reykjavik’, flew into RAF Lossiemouth in Scotland to join ZP801 ‘Pride of Moray’, ZP802 ‘City of Elgin’, and ZP803 ‘Terence Bulloch DSO DFC’ that had already been delivered. All nine aircraft are due to be in the United Kingdom by the end of 2021.

Poseidon operations are being flown by 120 Squadron and 201 Squadron, with 54 Squadron serving as the Operational Conversion Unit (OCU). 201 Squadron will be stood up as a second operational unit at a later date.

Once fully operational, the Poseidons will assume responsibility for protecting the Royal Navy’s two new Queen Elizabeth-class aircraft carriers, as well as undertaking their baseline maritime patrol aircraft (MPA) and anti-submarine warfare (ASW) roles. Although it was originally intended that the platforms should have an overland surveillance capability, an RAF officer recently told Janes that this would not now be the case, owing to the relatively few aircraft being procured and commitment to its core carrier protection/MPA and ASW tasks.

The RAF’s P-8As will be at the same standard as the aircraft fielded by the US Navy (USN) and all other export nations except India, which operates its own P-8I Neptune configuration (the most notable difference being the inclusion on the P-8I of a magnetic anomaly detector [MAD] boom in place of the P-8A’s Multi-Static Active Coherent [MAC] acoustic detection system for submarines).