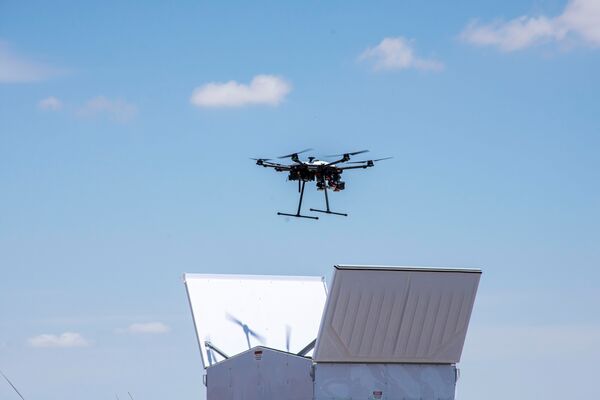 DroneHunter C-UAV system being tested by the US Army at Yuma Proving Ground, Arizona. (Fortem Technologies)

Following recent tests of its DroneHunter counter-unmanned aerial vehicle (C-UAV) technology with the US Army, Fortem Technologies is preparing for an operational assessment of the system.

DroneHunter is an artificial intelligence-enabled UAV, which intercepts other UAVs using a net tether. It is part of Fortem Technologies' broader SkyDome system, which comprises various elements that can be operated separately or together.

DroneHunter defeated a range of rotary- and fixed-wing UAVs during the US Army test at Yuma Proving Ground, Arizona. The targeted UAVs had various speeds, sizes, altitudes, and flight characteristics, according to Fortem Technologies.

DroneHunter is integrated with the US Army's Forward Area Air Defense Command and Control system. During the test, it used radar from the US Army's Fixed Site-Low, Small Unmanned Aircraft System Integrated Defeat System.

The test took place in August, and was the latest in a series of evaluations with the US Army, said Jim Housinger, vice-president of programme management at Fortem Technologies. It followed a similar test in March, which also took place at Yuma. DroneHunter's software was updated between the two tests, “enabling us to make some changes that the army had requested and to tighten up our targeting algorithms”, Housinger told Janes . The August test had a higher performance rate than the previous test, he added.

The recent test focused on ‘Group 1' UAVs, meaning small systems with a maximum weight of 9.1 kg. It included fixed- and rotary-wing systems, Housinger said, although details on the precise models used are restricted.