Footage released by Chinese state-owned media on 17 November of the test facility at the Huangdicun naval airbase suggests that Shenyang Aircraft Corporation (SAC) has produced at least two prototypes of J-15 fighter aircraft modified for catapult-assisted take-off but arrested recovery (CATOBAR) operations: a variant commonly referred to as the J-15T. 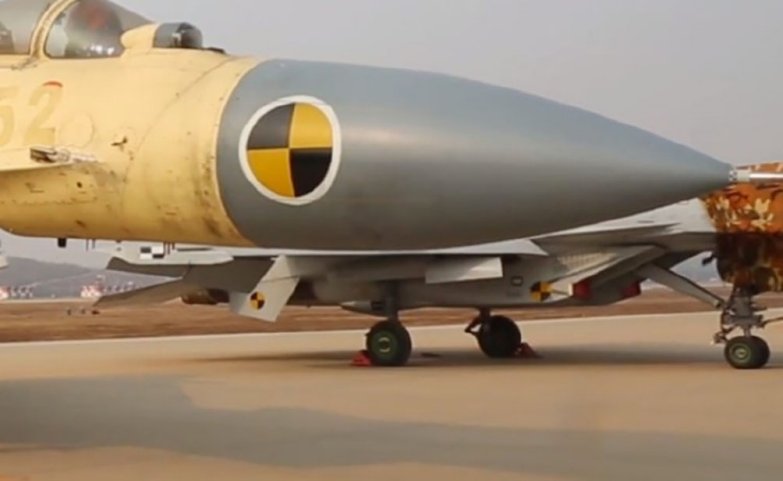 A still from footage released by CNR on 17 November showing part of a CATOBAR-capable J-15T (background, painted in grey) at China’s test facility at Huangdicun Airbase. (China National Radio)

The footage, which was part of a video report from China National Radio (CNR) on carrier pilot training and qualification, was released on the broadcaster’s official Weibo account, but removed from the social media platform only a few hours later.

The existence of the first CATOBAR-capable J-15 variant was confirmed in September 2016 when photos emerged showing the aircraft conducting a flight test. An assessment made at the time suggested that the J-15T prototype, which features a new nosewheel leg fitted with a catapult towbar and a more robust bracing strut, would be available for trials before the end of that year. By late 2016, China had completed construction of a test facility at Huangdicun Airbase featuring two catapult launch systems: one assessed to be a conventional steam-powered catapult, the other an electromagnetic catapult system.

The recent CNR video showed two grey-coloured J-15 prototypes at the facility, one of which was clearly recognisable as being CATOBAR capable. Since the two aircraft were parked in relative proximity of each other and both are marked with the black and yellow discs that facilitate analysis of flight performance during trials, it is highly likely that they are both J-15T prototypes, which would confirm rumours that a second aircraft is undergoing testing.