First images have emerged of the underwing pod installation on Boeing’s MQ-25A Stingray carrier-borne unmanned aerial refuelling system ahead of the start of flight testing.

The MQ-25A is intended to provide US Navy (USN) carrier air wings with a robust organic refueling capability to improve the combat of embarked strike fighters and extend the reach of the carrier air wing on the aircraft carriers. 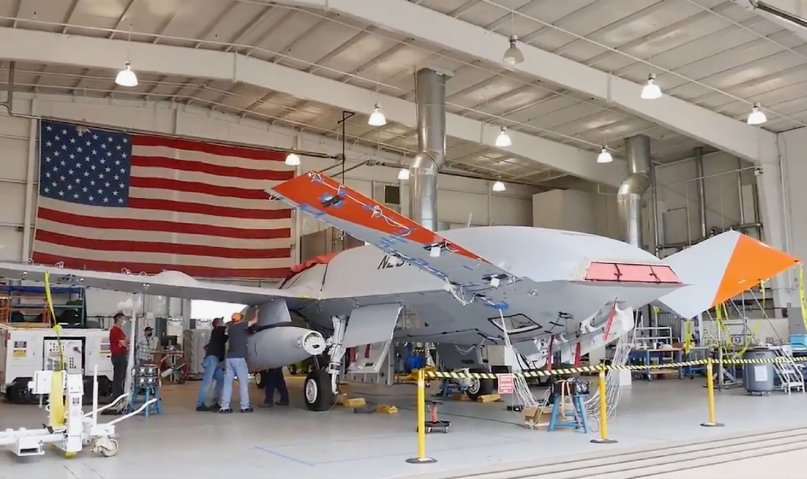 Screen capture of the underwing refuelling pod being mounted on T1. (Boeing)

Boeing was in August 2018 awarded a USD805.3 million engineering, manufacturing and development (EMD) contract by the Naval Air Systems Command (NAVAIR) for the design, development, fabrication, test, delivery, and support of four MQ-25A unmanned air vehicles, including integration into the carrier air wing for an initial operational capability in August 2024.

The MQ-25A is expected to deliver up to 15,000 lb of fuel at 500 n miles. Aerial refuelling operations will be undertaken using two standard buddy pods, one under each wing, paying out a refuelling hose and basket. These buddy stores, already in service on USN F/A-18E/F Super Hornets, are built by Cobham.

Images showing T1 fitted with the Cobham buddy store under its port wing were earlier released on 20 July by Democrat Senator Tammy Duckworth after she had visited the Boeing facility at MidAmerica regional airport in Mascoutah, Illinois, the previous week. Boeing later released a short video on social media showing the pod installation process being undertaken inside its hangar at MidAmerica airport.