The ship has received two Sadral launchers in place of the Thales Crotale CN2 point defence missile system fitted from build. As part of the upgrade, the Sadral system has been integrated with the SENIT FLF combat management system also introduced in the scope of the La Fayette upgrade programme.

The Direction générale de l'armement in May 2017 contracted Naval Group for the modernisation of three of the French Navy's five La Fayette-class frigates. The programme, which implements a series of platform and combat system upgrades, is designed to maintain a 15-ship frigate force ahead of the full introduction of the five new Frégate de défense et d'intervention frigates. 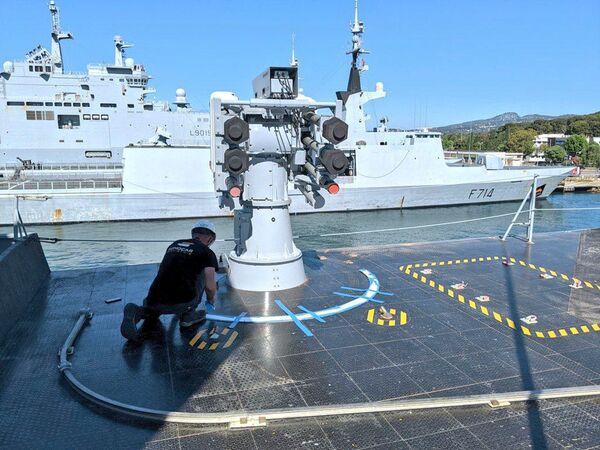 The newly installed Sadral launcher on the starboard side of FS Courbet's hangar roof. Sister ship FS Guépratte, visible behind, is still fitted with the Crotale system. (Xavier Vavasseur)

As part of the upgrade, the existing Crotale CN2 system will be removed and reconditioned Sadral launchers removed from previously decommissioned F70 frigates will be installed. Sadral is an automated six-round trainable launcher designed to fire the Mistral infrared guided missile for very short range defence against air and sea targets: the systems being retrofitted to the La Fayette-class ships are adapted to fire the latest Mistral 3 variant.

Mistral 3, as the latest evolution of the Mistral family, is equipped with an infrared imaging seeker and advanced image processing. According to MBDA, this enables engagement of low thermal signature targets such as unmanned aerial vehicles (UAVs) and fast inshore attack craft (FIACs) while at the same time providing good resistance against countermeasures.

FS Courbet has become the first of three French Navy La Fayette-class frigates to be refitted with M...