The first of the Russian Navy's new Arctic multipurpose support vessels entered service with the Black Sea Fleet during a ceremony held in Sevastopol, Crimea, on 29 May, the Russian Ministry of Defence (MoD) has announced. 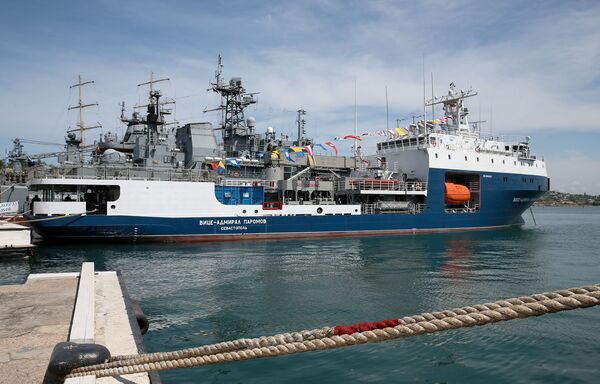 A commissioning ceremony was held for the Project 03182 small seagoing tanker Vice Admiral Paromov on 29 May as it entered service with the Russian Black Sea Fleet. The first ship of its class, this multipurpose vessel is designed for the transportation of liquid, dry and labelled cargo, and is capable of landing Kamov Ka-27-class helicopters. (Sergei Malgavko/TASS)

Vice Admiral Paromov is one of four Project 03182 vessels ordered by the MoD under two separate contracts awarded in 2014–16. Two ships are being built for the Pacific Fleet at Vostochnaya Verf in Vladivostok, while Volga Shipyard is building the second pair for the Black Sea Fleet at its yard in Nizhny Novgorod.

Developed by the Zelenodolsk Design Bureau, the Project 03182 vessels are designed to act as small replenishment and support vessels for Russian warships working in the Arctic region. Additional patrol and support functions include search and rescue, fishery protection, and support of oil and gas installations in the region. The ships are being built to Russian Arc 4 ice class standard and will be equipped with a 20-tonne crane amidships.

Vice Admiral Paromov was the first ship to be laid down at Volga Shipyard in September 2016 and was launched in December 2018. A second ship, Vasiliy Nikitin , was laid down at the yard in March 2017 and is expected to be launched this year.

The first of the Russian Navy's new Arctic multipurpose support vessels entered service with the Bla...

The Royal Navy's (RN's) Fleet Commander has signalled a major shift in how the RN will task and depl...

The Babcock-led Team 31 has completed the Whole Ship Critical Design Review (WSCDR) for the UK Royal...