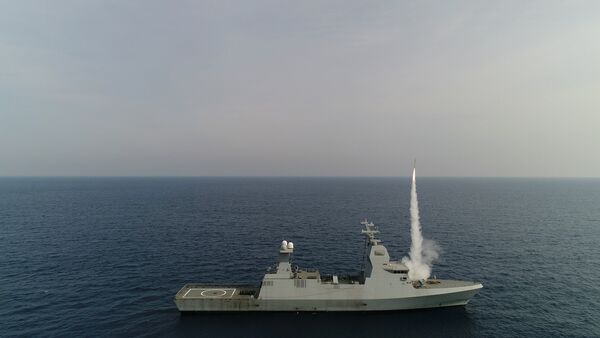 Magen launches a Tamir interceptor during the first test of its C-Dome air-defence system. (Israeli Ministry of Defense)

The Israeli Ministry of Defense (MoD) announced on 21 February the completion of the first trials of the naval version of the Iron Dome air-defence system fitted to the first of the Israeli Navy's four new Sa'ar 6-class corvettes.

“The C-Dome was operated for the first time aboard the Israeli Naval Ship (INS) Sa'ar 6 Magen corvette against multiple advanced threats,” the MoD said. While the ship's crew led the test, it also involved the Israel Missile Defense Organization (IMDO), a part of the MoD's Directorate for Defense Research and Development (DDR&D), and Rafael Advanced Defense Systems, the system's manufacturer.

The live-fire trial simulated a number of threat scenarios, including rockets, cruise missiles, and unmanned aircraft (UAVs). The MoD released videos of multiple rockets and drone targets being launched from the coast and Tamir interceptor missiles being launched from Magen's vertical launch system (VLS) to intercept them.

“The advanced detection system accurately identified various threats including rocket fire, cruise missiles, and UAVs. The system successfully intercepted the threats with surgical precision,” said IMDO Director Moshe Patel. “The success of today's tests further strengthens our confidence in our missile defence systems as well as the ability of the Israeli Navy to defend the maritime assets of the State of Israel.”

C-Dome is derived from the land-based Iron Dome system the Israel Defense Forces (IDF) use primarily to intercept artillery rockets. It is linked to IAI-Elta's Adir multi-mission radar, which is the Israeli Navy's variant of the EL/M-2248 MF-STAR, via a command-and-control system made by mPrest Systems.

The Israeli Ministry of Defense (MoD) announced on 21 February the completion of the first trials of...