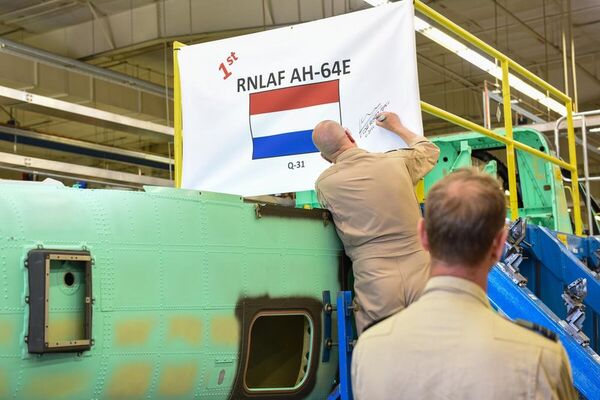 The first of 28 AH-64D Apache attack helicopters of the Royal Netherlands Air Force enters the Boeing remanufacturing line to be converted to the latest AH-64E standard. (Defence Materiel Organisation)

The Dutch Defence Materiel Organisation (DMO) announced the milestone of the first of 28 AH-64Ds to be converted to the AH-64E Version 6 standard entering the line at Mesa, Arizona, on 19 May.

The event comes six months after the helicopter was shipped to the US on 19 November 2021, and about three-and-a-half years after the US State Department approved the remanufacture of the Dutch Apaches in February 2018.

In its approval, the state department noted that the USD1.191 billion project would include cross-decking those already paid for and expensive items, such as the AN/ASQ-170 Modernized Target Acquisition and Designation Sights (MTADS)/AN/AAR-11 Modernized Pilot Night Vision Sensors (PNVS), that are common to the AH-64D Block 2 and AH-64E standard over from the current airframes onto newly built airframes, while at the same time replacing those items that are not common to the two standards, such as the latest T700-GE-701D engines. The introduction of the new engines means that the mast-mounted sight can be carried during ‘hot and high' operations, when previously it had needed to be removed because of weight restrictions.

The Dutch Defence Helicopter Command will receive back into service all of its 28 refurbished Apaches (including eight helicopters that are stationed for training purposes at Fort Hood in Texas) from mid-2023 till early 2025.