Fincantieri handed over the Italian Navy’s new logistic support ship (LSS), Vulcano (A 5335), during a ceremony held at its Muggiano shipyard in La Spezia on 12 March.

The LSS was built by Fincantieri under a contract awarded by European defence procurement organisation OCCAR in May 2015 on behalf of the Italian Ministry of Defence. Vulcano is the first of a class of three ships planned to replace the Italian Navy’s Stromboli-class fleet replenishment oilers under the service’s multiyear fleet renewal programme. 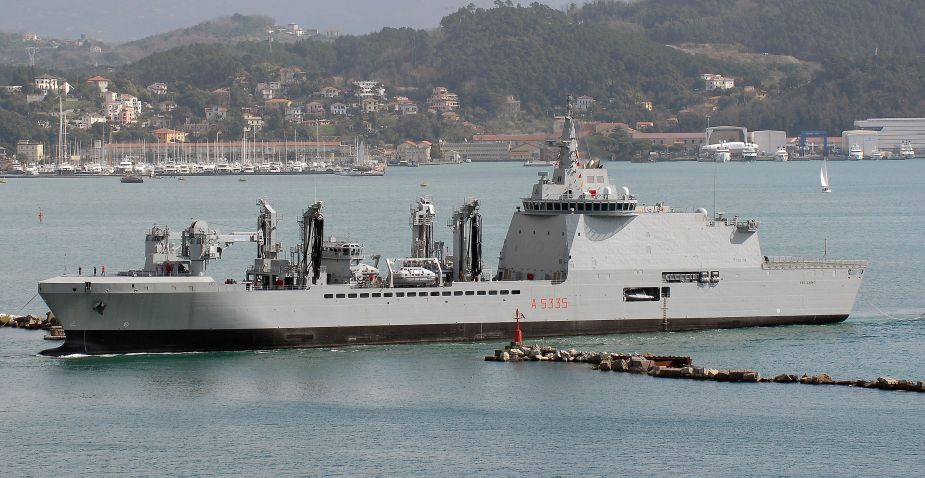 Vulcano was delivered to the Italian Navy on 12 March. (Luca Peruzzi)

Classed to RINA standards, the double-hulled ship is designed to support both abeam replenishment at sea (RAS) while under way and vertical replenishment.

The ship features a large single spot flight deck and hangar capable of accommodating up to two EH101 or NFH90 helicopters, a NATO Role 2 medical facility, and maintenance and repair facilities. The ship can also embark a task group command with dedicated facilities.

In the humanitarian assistance and disaster relief (HADR) role, it will be able to provide fresh water and 2,500 kW of electrical power to people ashore. The ship can accommodate 235 personnel, including a crew complement of 167.