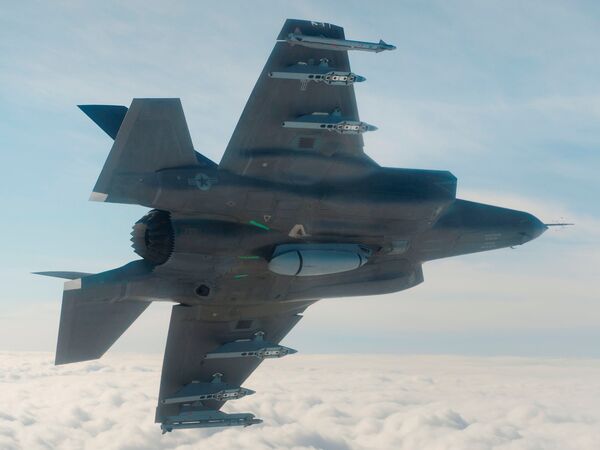 Seen on the centreline of an F-35B test aircraft, the pod-mounted 25 mm GAU-22/A Gatling gun has not been ordered by the UK. (Lockheed Martin)

“The days of the gun are probably over for the way we do business,” according to a senior UK Royal Air Force (RAF) Lockheed Martin F-35 Lightning pilot, speaking to an audience at the Farnborough Airshow on 19 July.

In terms of fighting at close quarters, “We don't want to go there,” said Air Cdre Beck, “and we don't need to go there because we will make sure we play to our advantages and not theirs.

“We have no intention of flying fourth-gen tactics. A good fourth-generation jet pulls lots of g . To pull lots of g you need big canards, you need big movement of lifting surfaces, and all of that is music to a fifth-gen pilot's ears because it's increased RCS [radar cross-section], so I'll just detect it further away.

“So come the dogfight, we've won because we're not going to dogfight. The best way you can win a fight is not to manoeuvre your jet; let fusion have a nice stable platform to look at it and say ‘Right, I've got you'.”

While the F-35A has an internal cannon, the UK's F-35Bs can only carry a pod-mounted 25 mm GAU-22/A Gatling gun. This weapon is essentially for air-to-ground missions, and the UK has no plans to acquire it.

“The days of the gun are probably over for the way we do business,” according to a senior UK Royal A...