The A and C variants of the Lockheed Martin F-35 Lightning II Joint Strike Fighter (JSF) are to receive a new extended-range air-to-surface missile under plans disclosed on 7 January. 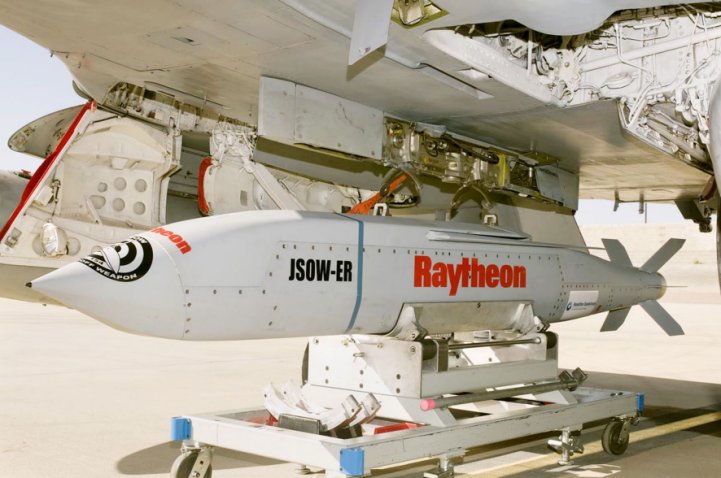 Seen about to be fitted to an A-4 test aircraft, the JSOW-ER is to be internally carried by the F-35A and F-35C. (Raytheon)

The Naval Air Systems Command (NAVAIR) revealed in a sole-source contract notification for further development of the Raytheon AGM-154 Joint Stand-Off Weapon – Extended Range (JSOW-ER) that, as well as being integrated onto the Boeing F/A-18E/F Super Hornet, the air-to-surface missile will also be fitted for internal carriage onto US Air Force (USAF) and international F-35As and US Navy (USN) F-35Cs.

The NAVAIR contract notification pertained to the technology maturation risk-reduction (TMRR) and engineering, manufacturing and development (EMD) phase of the JSOW-ER, with the goal of fielding the weapon no later than fiscal year 2023. The maximum internal load for the F-35 would be two missiles.

While the baseline JSOW is a glide-weapon with a maximum range of 116 km when released at high-altitude, the JSOW-ER uses a Hamilton Sundstrand TJ-150 turbojet (as fitted onto Raytheon’s MALD powered decoy) to give it a reported range of about 463 km (Raytheon has said it expects a maximum effective range of 555.6 km when launched under optimum conditions).

The JSOW-ER is a form-fit version of the AGM-154C-1 variant JSOW that is included in the roadmap for the F-35 (Block 3F – full combat capability), and which was cleared for internal carriage on the aircraft in late 2011. As such, its integration aboard the aircraft should be relatively straightforward.

The A and C variants of the Lockheed Martin F-35 Lightning II Joint Strike Fighter (JSF) are to rece...