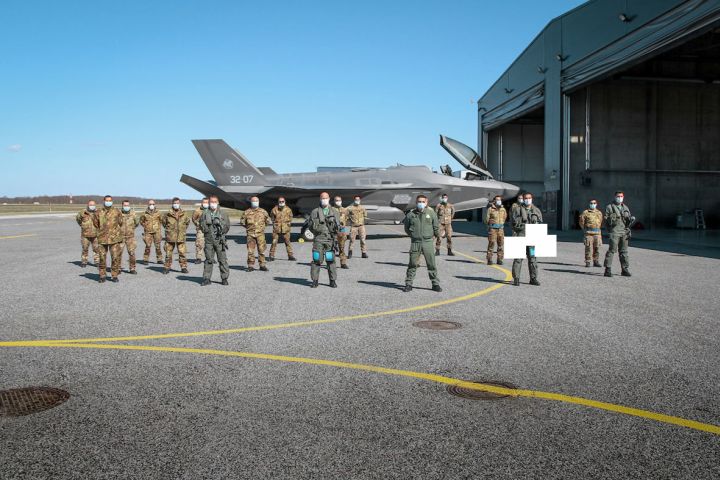 One of the four Italian Air Force F-35As that recently arrived at Amari Air Base in Estonia, alongside some of the service personnel that will conduct the type’s first operation in support of the NATO Baltic Air Policing mission. (Bundeswehr via NATO Allied Air Command)

Four conventional take-off and landing (CTOL) F-35As from 13 Squadron of the 32nd Wing arrived at Amari Air Base in Estonia on 30 April, having flown from their home base of Amendola in southeastern Italy with the support of a Boeing KC-767 tanker.

”The first deployment of the fifth-generation fighter aircraft to NATO’s enduring mission in the Baltic region shows how NATO’s air forces are adapting to the mission by employing advanced technology,” the NATO Allied Air Command said.

The AMI F-35s take on the BAP role at Amari from a detachment of Luftwaffe Eurofighters. During the approximately four-month rotation the AMI F-35s will support Spanish Air Force Eurofighters flying out of Siauliai Air Base in Lithuania, and Turkish Air Force Lockheed Martin F-16 Fighting Falcons flying out of Malbork Air Base in Poland (this being the first Turkish deployment in support of the NATO BAP mission since 2006).

The NATO BAP mission is part of a wider enhanced air policing mission that includes the recently constituted Southern Air Policing mission based in Bulgaria and Romania, as well as similar missions that cover Albania, Iceland, Slovenia, and the BENELUX nations of Belgium, the Netherlands, and Luxembourg.