Next article
North Korea's military capabilities to pose ‘increasing threat' to US and its Asian allies, says ODNI

EXPAL told Janes in a statement that firing trials are to STANAG 4224 and are being carried out at the National Institute of Aerospace Technique, which belongs to the Spanish MoD. 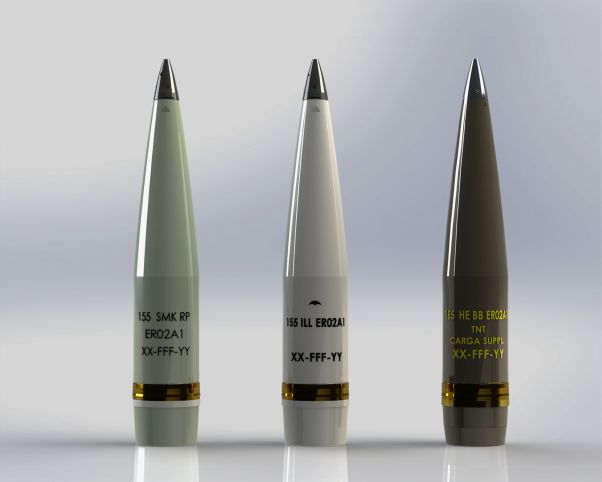 The complete family of EXPAL 155 mm extended range projectiles, from left to right, include smoke, illuminating, and high-explosive versions. (EXPAL)

The latest two 155 mm artillery projectiles being qualified are multi-spectral smoke (designated 155 SMK RP ER02A1) and illuminating (designated 155 ILLUM ER02A1). Both can be supplied as a boat tail (BT) or base bleed (BB) munition.

These 155 mm projectiles meet the NATO Joint Ballistic Memorandum of Understanding for 155 mm artillery projectiles and can be fired from 155 mm 39/45/52 calibre weapons and used with older bag type charges or the latest MCS, according to EXPAL.

The smoke projectile has a payload of four canisters containing a chemical mixture based on red phosphorous that produces a dense smoke screen in visible and infrared.

According to EXPAL, one projectile will form a smoke screen about 30 m wide and 6 m high, lasting for more than 120 seconds, but these figures depend on ambient conditions such as wind speed.