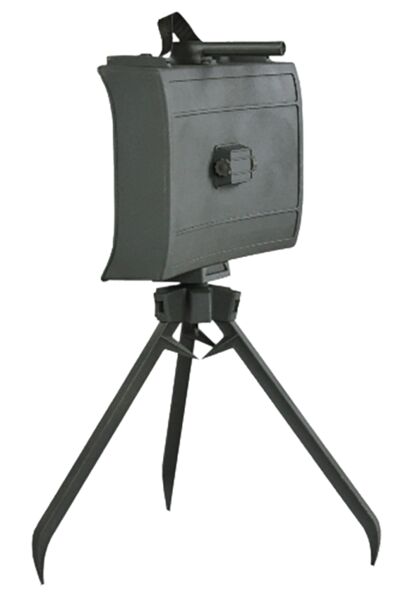 Estonian munitions specialist Terramil will shortly commence production of a new anti-personnel (AP) mine and is developing an anti-tank (AT) mine, Janes has learnt.

Speaking to Janes at Eurosatory 2022 in Paris, Kristo Kirs, a member of Terramil's board, said that the company had developed its M-13 AP mine in response to a request from the Estonian military.

Work on the mine began about a year ago and production is scheduled to start in August, Kirs said, adding that the M-13 is the largest AP mine in the company's product line. It features 12 kg of high explosives (HEs) and 1,200 steel pellets, and is lethal at a distance of 200 m in a 60° arc, according to the company.

It is fitted to a tripod and its mount enables the mine to be elevated. Kirs said that the M-13 is designed to operate with a man-in-the-loop.

The AT mine under development is designed to be buried and attack the underside of a vehicle. The company already produces an anti-armour mine – the M-14. This has 1.7 kg of HEs, and when detonated, forms an explosively formed penetrator. The M-14 can be buried in or used above the ground on a tripod mount or attached to a tree, for example.

When buried, the mine uses a clearing charge to remove the earth above the mine before the main charge is detonated 0.2 seconds later.

The AT mine will only be operated in a buried position as Kirs said that it is difficult to defeat a main battle tank's side armour.