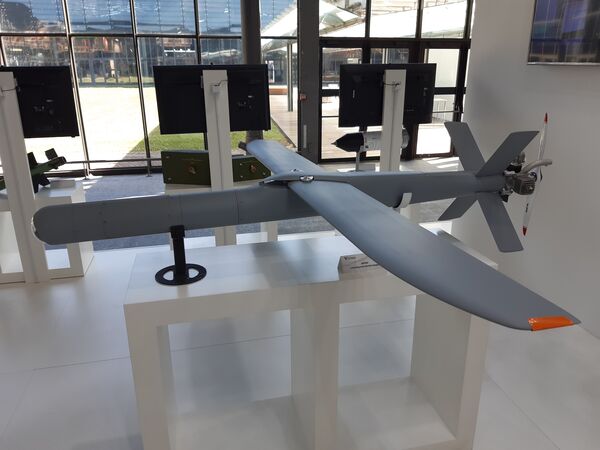 Seen at Eurosatory in Paris, the Graven is a Serbia-developed loitering munition that is currently in its initial development phase. (Igor Bozinovski)

Currently in the initial development phase, the Gavran is intended to be a low-cost, long-range intelligence, surveillance, target acquisition, and reconnaissance (ISTAR) system and strike weapon.

Launched by solid propellant booster and powered by either a combustion or electric engine driving a pusher propeller, the Gavran is 4.5 m in length and has a 3.2 m wingspan. The air vehicle has a 50 kg maximum take-off weight and a 15 kg payload capability, and can fly at 120 km/h while loitering for up to 30 mins at about 5,000 ft out to a range of up to 100 km.

The interchangeable explosive payload of each Gavran vehicle would be made of a 175 mm / 12 kg combined shaped-charge, high-explosive fragmentation warhead, or other types of target-tailored weapon packages, including 122 mm / 13 kg, 130 mm / 10.5 kg, and 145 mm / 6.4 kg warheads.

The Gavran weapon system is designed to operate in a swarm of several vehicles operated from a single command post used for launching, with flight information relayed through encrypted radio datalinks. Capable of being readied and launched from a vehicle-mounted container in one minute, the Gavran would use inertial, GPS, GLONASS, and in the final stage TV/infrared imaging camera homing.