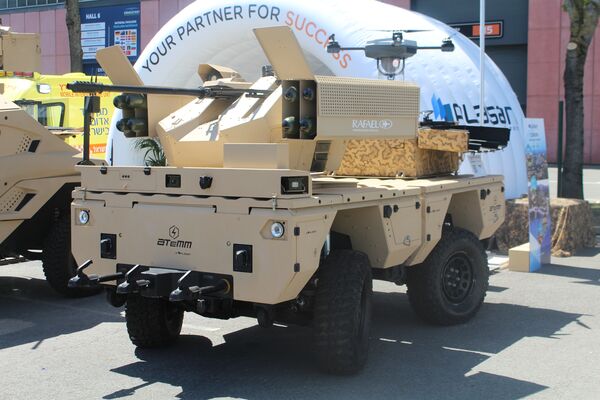 Speaking to Janes , Nir Kahn, Plasan's director of design, spoke in depth about the technical details of the platform, which is designed to double as an independently-operable unmanned ground vehicle (UGV) and powered towable platform that integrates closely with the towing vehicle.

Outlining the system, Kahn said, “It's not a trailer by any description. When it's behind a vehicle, it's still working in tandem with that vehicle.… You can stick this [ATeMM] behind any 4×4 – Humvee, Land Rover, one of our vehicles, JLTV, whatever that might be – and you've turned your diesel 4×4 into a hybrid-electric 6×6 with four-wheel steering.”

Explaining the rationale behind the system, Kahn told Janes , “On its own it's a UGV, but we're solving one of the big problems that no other electric UGV producer is solving, and that's: how do you actually get it to where you're going to use it? Whether it [another UGV] is wheeled or tracked, electric, or whatever [kind of] robot, to take it where you want to use it you need to put it onto a flatbed. You've now brought a whole other vehicle to a combat zone just to take this with you.”