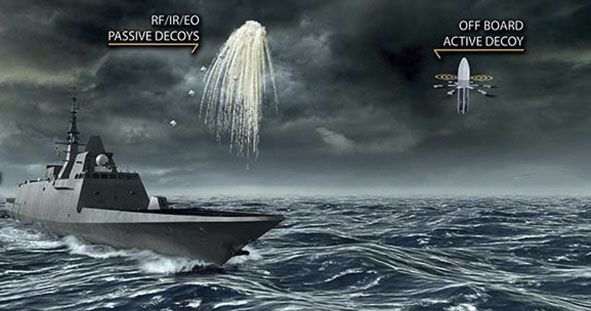 The year-long concept development effort, known as Véhicule Ejecté Support Tactique d’Autoprotection (VESTA), is being funded under a call released by France’s Agence Innovation Défense. The accelerator project, being undertaken in partnership with specialist UAV house Aviation Design, is intended to establish the feasibility of reactive soft-kill anti-ship missile defence decoy that employs a manoeuvring multirotor UAV to deploy a jammer payload.

According to Lacroix, the VESTA decoy is intended to provide an additional and complementary layer of ship self-protection, operating inside the envelope of hard-kill anti-air guided missiles but further offboard than typical soft-kill seduction decoys. The current programme is focused on the launch system and the performance of the multirotor carrier vehicle: the electronic warfare (EW) payload itself is outside the scope of the project.

In Lacroix’s concept, a rocket-boost motor is used to power the VESTA round offboard. Once deployed to range, the air vehicle deploys six rotor arms and transitions to controlled flight. The EW payload, housed in the forward section of the flight vehicle body, then begins to transmit a suitable jamming modulation.

French countermeasures and pyrotechnics group Lacroix has revealed a package of studies and associat...