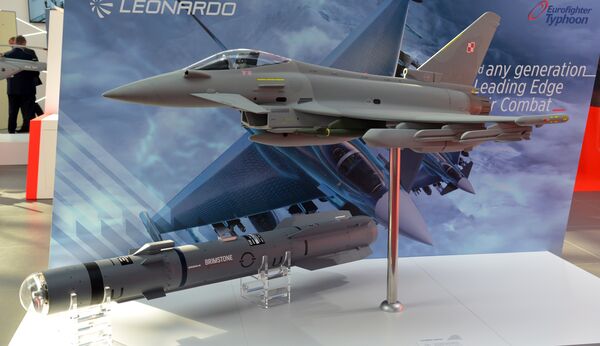 A model of a Eurofighter Typhoon in Polish markings. The multinational consortium is offering the jet to Poland. (Janes/Patrick Allen)

The Eurofighter consortium has invited Poland to join the programme as it plans to secure a Typhoon sale to the Eastern European country.

The multinational consortium of Germany, Italy, Spain, and the United Kingdom made the offer during 2022 Farnborough Airshow, with a Eurofighter spokesperson telling Janes on 28 July that such a partnership would see Poland gain “full access to [the] aircraft's capabilities, full national sovereignty, and Polish-qualified industrial involvement”.

According to the spokesperson, Poland could join the latest production run, which would enable the country to receive the Typhoon in time to support the planned entry of the Lockheed Martin F-35A Lightning II Joint Strike Fighter into Polish service in 2024.

As Janes has learnt, Typhoons to be offered to the Polish Air Force (Inspektorat Sił Powietrznych: ISP) could be fitted with the Leonardo European Common Radar System Mark 2 (ECRS Mk2) radar that is being developed with electronic warfare (EW) capabilities and a combination of US and European weapon systems such as the MBDA Meteor beyond-visual-range air-to-air missile, Selective Precision Effects At Range Capability 3 (SPEAR 3) air-to-surface missile and SPEAR EW effector, and the Storm Shadow cruise missile.

With the initial offer made, a more specific offer is expected during the 30th International Defence Industry Exhibition (MSPO) to be held in Warsaw at the beginning of September. Such an offer would be followed by the industrial co-operation proposal. According to the Eurofighter Typhoon Consortium representatives, after joining the programme, Polish Military Aviation Works no 1 and no 3 (Wojskowe Zakłady Lotnicze: WZL) might be invited to join the global supply chain.

The Eurofighter consortium has invited Poland to join the programme as it plans to secure a Typhoon ...