Emiratis seen operating Pantsir-S1 said to be in Libya

A leaked video has confirmed that personnel from the United Arab Emirates (UAE) are operating Russian-made Pantsir-S1 air defence systems in Libya, according to Operation Burkan al-Ghadab, the co-ordinating body for forces fighting for the internationally recognised Government of National Accord (GNA) against the rival Libyan National Army (LNA).

It tweeted the video on 8 June, saying it showed for the first time UAE personnel accompanied by Libyans from the LNA operating a Pantsir-S1. 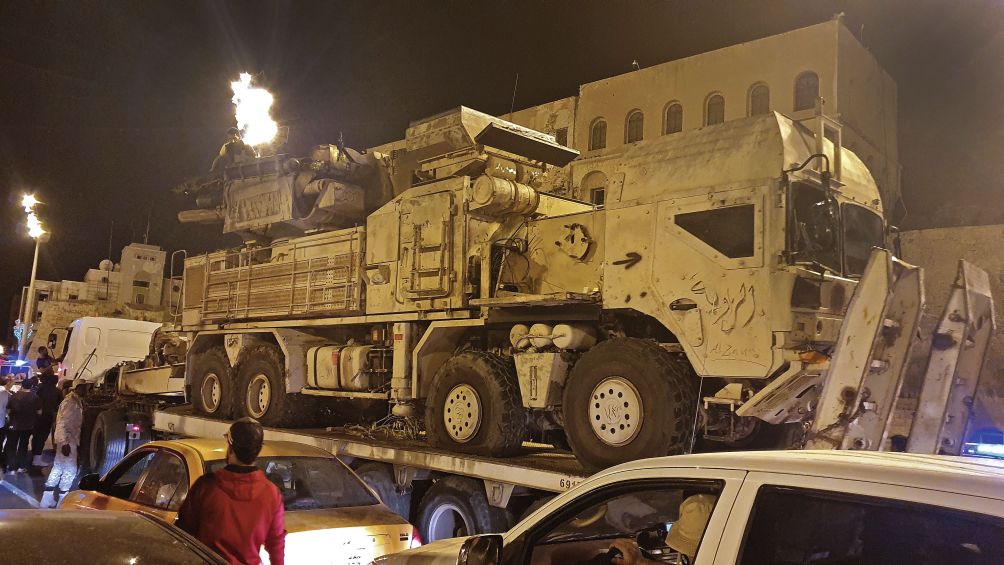 The damaged Pantsir-S1 that was captured at Al-Watiyah Air Base was paraded in Tripoli on 20 May. (Ahmud Turkia/AFP via Getty Images)

The video was filmed inside an air defence system that had screens matching those of the Pantsir-S1, albeit ones that use the Latin rather than Cyrillic alphabet.

The operators were not clearly seen, but their voices could be heard as they tracked a target using the system’s radar and infrared sensors. Speaking Arabic with a Gulf accent, one says the target is 4 km away, but he does not have permission to fire.

Clearance is then given, a missile is launched, which is seen hitting the target on the infrared screen, and the operators celebrate.

Other voices with possible North African accents can be heard less clearly.

It had already been confirmed that some of the Pantsir-S1 systems that Russia supplied to the UAE had been deployed to Libya in support of the LNA, with a damaged one being captured when the GNA took control of Al-Watiyah Air Base in May. The UAE versions are distinctive because they are the only ones mounted on MAN trucks.

A leaked video has confirmed that personnel from the United Arab Emirates (UAE) are operating Russia...

The Georgian government has revealed its defence procurement priorities up to 2030, which includes a...

The Singapore Army has commissioned a new all-terrain self-propelled mortar system based on its in-s...
Request Consultation