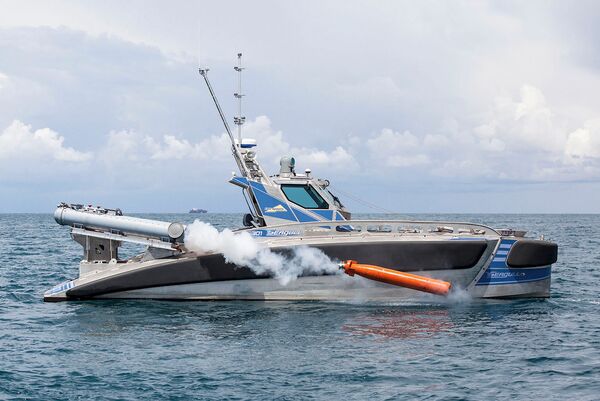 A torpedo being launched from a Seagull USV. Elbit Systems announced on 13 September that it has secured contracts worth a combined USD56 million to provide ASW capabilities, including an undisclosed number of ASW-capable Seagull USVs, to the navy of a country in the Asia-Pacific region. (Galina Kantor via Elbit Systems)

Israeli company Elbit Systems announced on 13 September that it has secured contracts worth a combined USD56 million to provide anti-submarine-warfare (ASW) capabilities to the navy of an undisclosed country in the Asia-Pacific region.

The Haifa-based company said that under the contracts, which are to be performed over a 12-month period, it will provide an undisclosed number of Seagull unmanned surface vehicles (USVs) configured to perform ASW missions as well as Towed Reelable Active Passive Sonar (TRAPS) systems.

The TRAPS systems, which are low-frequency variable-depth sonars intended for detection, tracking, and classification of submarines, midget submarines, surface vessels, and torpedoes, will be installed on the customer's corvettes, noted the company.

Unveiled at the Singapore Air Show in February 2016, the Seagull is a 12 m multirole USV developed by Elbit for operations from either a mothership or a shore station. Designed for a mission endurance in excess of 96 hours, the system marries an autonomous C2/situational awareness suite with modular payload packages tailored to specific missions including mine countermeasures (MCM), ASW, hydrography, electronic warfare, and maritime security.

Israeli company Elbit Systems announced on 13 September that it has secured contracts worth a combin...