Egyptian frigate deal ‘yet to be finalised'

The authorisation of the sale of two FREMM frigates to Egypt is “still in progress”, Italian Foreign Minister Luigi Di Maio told parliament on 10 June. 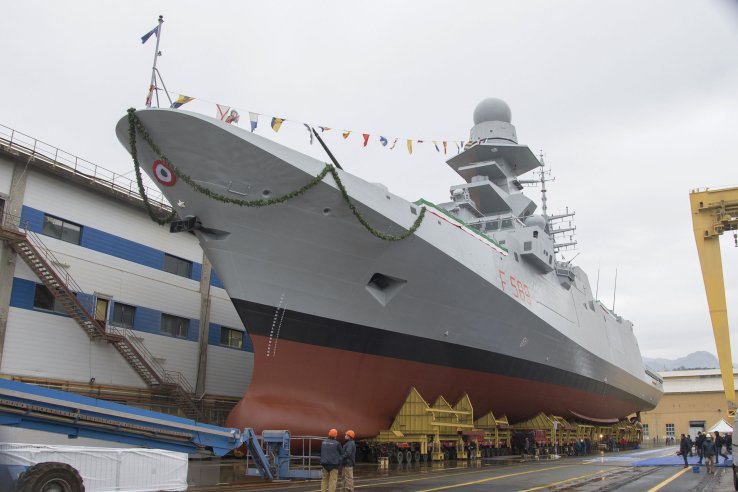 Emilio Bianchi is seen during its launch at Fincantieri’s Riva Trigoso yard on 25 January. (Italian Ministry of Defence)

He said the case was still being examined on a technical and legal basis and the government was carrying out a political evaluation.

His comments appeared to contradict an 8 June report by the ANSA news agency that cited sources close to the subject as saying Prime Minister Giuseppe Conte has approved the sale of the Bergamini-class frigates Spartaco Schergat and Emilio Bianchi for an estimated EUR1.2 billion (USD1.3 billion) after speaking with Egyptian President Abdel Fattah el-Sisi the day before.

Both frigates were ordered for the Italian Navy and have been launched, but not commissioned as yet.

The Italian media has reported that the frigate deal is part of a much larger package that includes another four frigates, 20 corvettes based on the Falaj class that Fincantieri built for the United Arab Emirates, 24 Eurofighter Typhoon multirole jets, 24 M346 jet trainers, and a surveillance satellite.

It was confirmed in May that Leonardo has already secured a contract to supply 24 AW149 and eight AW189 helicopters to the Egyptian military for approximately EUR871 million.

The defence sales are controversial in Italy due to Egypt’s human rights record, particularly in the light of the ongoing parliamentary investigation into the death of Giulio Regeni, an Italian student who was tortured and killed in Egypt in 2016. The Egyptian Ministry of Interior has said he was killed by criminals but there are claims he died in the custody of Egyptian security forces who suspected him of spying.

The authorisation of the sale of two FREMM frigates to Egypt is “still in progress”, Italian Foreign...

Italian Prime Minister Giuseppe Conte has approved the sale of two FREMM frigates to Egypt after he ...