Egypt's President Abdel-Fattah el-Sisi inaugurated a large new naval base in the west of the country on 3 July. 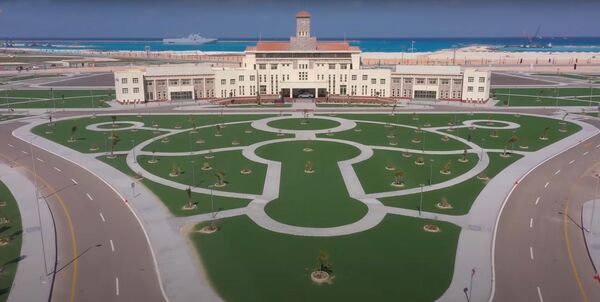 The date of the inauguration and the name of the 3 July Naval Base referenced the coup that deposed President Mohamed Morsi in 2013. It has been under construction at Ras Gargoub, about 140 km east of the Libyan border and 315 km west of the main Egyptian naval base in Alexandria, since 2018.

The Egyptian Ministry of Defence released a video with English subtitles that said the new base has “a unique geographic location that achieves additional capabilities for securing the Egyptian northern coasts, the closest launching point to stave off any potential threats”.

The video provided details of the base's facilities, saying it occupies a 10 km2 site and has a 1 km-long naval wharf with a depth of 14 m.

Egyptian television coverage showed Egypt's newest vessels were moored along the wharf for the ceremony, including a Type 209/1400 submarine, both Egypt's ex-Italian Navy FREMM frigates, the Gowind corvette Port Said, the CPV 60 patrol ship, and nine OPB 41 patrol boats. Some of these vessels made way for Gamal Abdel Nasser, one of Egypt's two Mistral-class amphibious assault ships.

The video said the base also has commercial quays with a length of 2.2 km and a depth of 17 m, although satellite imagery shows this is still under construction.

Egypt's President Abdel-Fattah el-Sisi inaugurated a large new naval base in the west of the country...