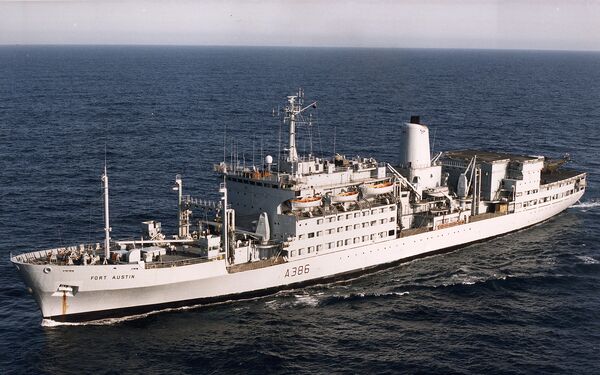 Ex-RFA Fort Rosalie and ex-RFA Fort Austin (pictured), both more than 40 years old, will undergo a refit and overhaul ahead of delivery to Egypt. (MoD/Crown Copyright)

The UK Ministry of Defence (MoD) has concluded an agreement with Egypt for the sale of two ex-Royal Fleet Auxiliary (RFA) solid stores ships.

Ex-RFA Fort Rosalie and ex-RFA Fort Austin , both more than 40 years old, were formally retired from service earlier this year. Egypt has entered negotiations with Birkenhead-based shipbuilding and shiprepair group Cammell Laird for the regeneration and refit of the two ships – both laid up in Bidston docks, Birkenhead – prior to delivery.

Built by Scott Lithgow, and entering service in 1978 and 1979 respectively, Fort Rosalie and Fort Austin are afloat support ships designed to deliver bulk ammunition, dry stores, and food to maritime task groups. Displacing 23,400 tonnes, the vessels have a capacity for up to 3,500 tons of ammunition, stores, and victuals across four holds with a volume of 12,800 m 3.

Six replenishment at sea stations are fitted for the transfer of cargo while under way. The ships also have extensive aviation facilities, with a twin hangar sized for up to three Sea King-size helicopters, a primary single-spot flight deck, and an emergency landing platform atop the hangar.

Fort Rosalie and Fort Austin were retired at the end of March following the release of the UK's Defence Command Paper earlier that month. Both vessels had in fact already been laid up in Birkenhead for some time under the care and maintenance of Cammell Laird.

The UK Ministry of Defence (MoD) has concluded an agreement with Egypt for the sale of two ex-Royal ...