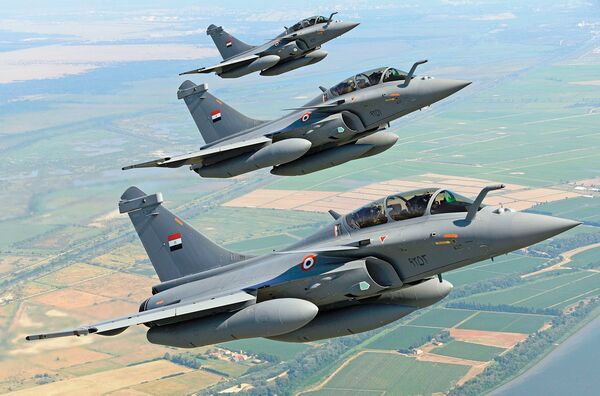 Egypt's contract to increase its Rafale fleet from 24 to 54 aircraft has now come into force. (Dassault)

Egypt's contract with France for a further 30 Dassault Rafale combat aircraft came into force on 15 November.

The manufacturer announced that the contract signed on 4 May to bring Egypt's total Rafale fleet from 24 up to 54 aircraft has now been activated.

As announced earlier in the year, Egypt is to acquire the additional Rafales for EUR3.8 billion (USD4.6 billion) via a 10-year loan.

Egypt signed for its first 24 Rafales (16 Rafale B/DM two-seaters and eight Rafale C/EM single-seaters) in early 2015, with deliveries commencing later the same year and running through to late 2017. Neither the composition of this latest order nor its delivery timeline have yet been revealed.

Although not noted in the announcement by the Egyptian MoD, the country's new Rafales are likely to be built to the latest F3-R standard that has recently been declared fully operational by the French armed forces.

In Egyptian Air Force (EAF) service, the Rafale is operated out of Gebel el-Basur Air Base, near Cairo. The service has used the type in combat operations against the Islamic State in North Africa, most notably in May 2017 when Rafales struck Islamic State targets in eastern Libya.

Egypt's contract with France for a further 30 Dassault Rafale combat aircraft came into force on 15 ...