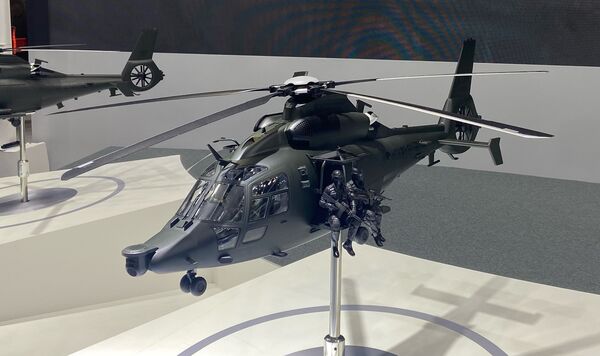 A model of the LUH variant of the LAH helicopter was displayed by KAI at DX Korea 2022. (Andrew White)

Korean Aerospace Industries (KAI) unveiled a new helicopter variant to support special operations forces (SOF) at DX Korea 2022, which is being held in Seoul from 21 to 25 September.

The Light Utility Helicopter (LUH) is a variant of KAI's Light Armed Helicopter (LAH), which is in the final stages of development ahead of production for the Republic of Korea Army (RoKA) from 2023.

According to KAI's regional manager for international sales and marketing, Byoung Sam Choi, development of the LUH is being pitched for many mission sets, one of which is the Special operations Attack Helicopter (SAH).

Choi said that the LUH comprises a stripped-out LAH, providing greater space to carry troops both inside the cabin and on outboard benches similar to those used onboard Boeing's MH-6M Little Bird as used by the US Special Operations Command.

Confirming that both the LAH and LUH are based on the same Airbus Helicopters H155 airframe, Choi said that the LAH will have a maximum take-off weight of 4,920 kg. The airframe measures 14.3 m in length, 4.3 m in height, and 3.9 m in width.

KAI exhibited a scale model of the LUH at DX Korea 2022, illustrating how outboard benches can carry two SOF operators each.

An accompanying computer-generated movie played at the event showed how the SAH could be used to support special operations in dense urban environments where operators could employ the helicopter's Fast Rope Insertion Extraction System (FRIES) to insert quickly onto the ground or rooftops.