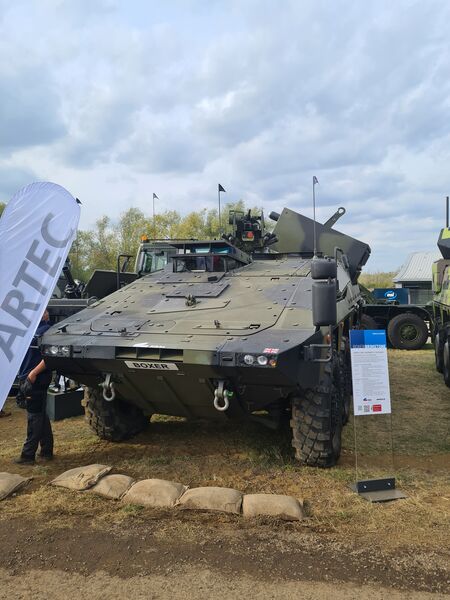 RBSL displayed a concept demonstrator of the Boxer Overwatch variant at DVD 2022 with a mission module for launching eight Brimstone missiles (seen here in the raised position). (Janes/Christopher Petrov)

Rheinmetall BAE Systems Land (RBSL) unveiled a demonstrator of the Boxer 8×8 armoured vehicle equipped with a mission module for launching Brimstone missiles at the Defence Vehicle Dynamics (DVD) event held at the Millbrook Proving Ground on 21 and 22 September 2022.

Known as Boxer Overwatch, this new variant was developed by RBSL in collaboration with MBDA to show how the companies may be able to meet British Army requirements for a Mounted Close Combat Overwatch (MCCO) system. This is intended to be capable of engaging armoured targets at greater stand-off ranges than the retired Swingfire anti-tank guided missile (ATGM) mounted on the FV102 Striker tracked armoured vehicle. It forms part of the wider Battle Group Organic Anti-Armour (BGOAA) initiative to refresh the British Army's anti-armour capabilities.

During a joint presentation at DVD 2022 on 21 September, Colin McClean, managing director of RBSL, and Chris Allam, managing director of MBDA UK, explained that Boxer Overwatch is intended to use the same Brimstone missiles as used by other platforms in the UK armed forces, which would increase commonality between the services and enable all users to benefit from continued spiral development of the Brimstone missile.