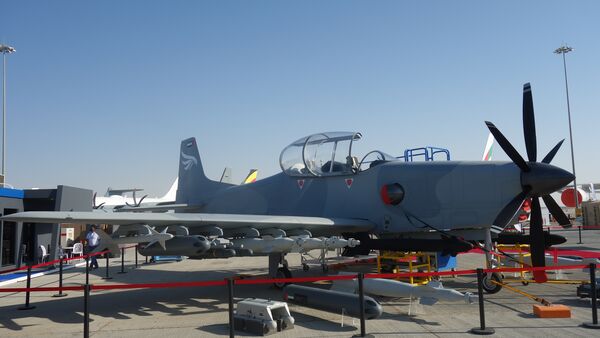 Seen for the first time at the Dubai Airshow 2021, the Calidus B-350 is a ‘light attack' aircraft that is close to double the size of nearly any other platform in the same category. (Janes/Akshara Parakala)

United Arab Emirates (UAE)-based Calidus has showcased a new ‘light attack' turboprop at the Dubai Airshow 2021, designated the B-350.

A full-scale mock-up of the single-engined twin-seat platform was shown publicly for the first time, complete with a prospective weapons fit that includes a range of largely domestically-developed air-to-surface bombs, rockets, and missiles for offensive operations, as well as air-to-air missiles for self defence.

With a reported wingspan and length in excess of 15 m, and with a maximum take-off weight of approximately nine tonnes, the B-350 is said to be powered by a 2,500–3,000 shp Pratt & Whitney Canada PW127 engine. The aircraft has 12 underwing hardpoints (which can be increased through the use of dual-launchers), as well as an under-fuselage retractable electro-optic/infrared (EO/IR) sensor turret.

Calidus told Janes that the B-350 will have an endurance of seven hours, a range of 350 km, and a service ceiling of 35,000 ft. The manufacturer added that it is to be built from largely composite materials, and equipped with the same Collins Aerospace Pro Line Fusion avionics package as the much smaller B-250 light attack aircraft it revealed at the same event in 2017.

As with the B-250, it is not clear to what extent the B-350 is geared towards the UAE Air Force and Defence (AFAD), and/or the international export market. The UAE AFAD currently fields the IOMAX Archangel platform that performs the same mission, and which falls roughly in the midway point between the B-250 and B-350 in terms of its size.

United Arab Emirates (UAE)-based Calidus has showcased a new ‘light attack' turboprop at the Dubai A...

The launch and recovery system (LARS) developed for the Belgium/Netherlands (BE/NL) replacement mine...
Request Consultation