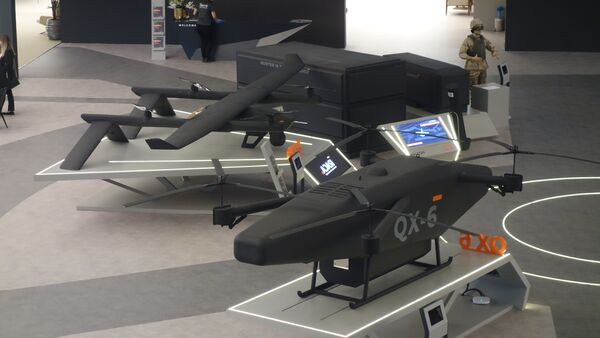 The QX Series of small VTOL UAVs was showcased at the Dubai Airshow 2021. (Janes/Akshara Parakala)

The QX-5 is a fixed-wing small VTOL tactical UAV primarily designed for intelligence, surveillance and reconnaissance (ISR) roles. Unlike the earlier versions QX-3 and QX-4, which can support attack missions, QX-5 is focused on extended range and endurance ISR missions.

The design of the QX-5 is based on the QX-4 but the boom-mounted tail in the QX-4 is replaced by two inverted V-tails on each boom on QX-5. The air vehicle (AV) lands on the tail along with two mini support installed at the nose of the fuselage. The support additionally protects the electro-optical/infrared sensor installed beneath the nose section of the fuselage. The AV is propelled forward with the help of a twin-cylinder turboshaft engine driving a two-bladed propeller at the rear of the fuselage.

The AV has a maximum take-off weight of 110 kg, a range of 100 km, an endurance of 7–16 h (depending on payload configuration, minimum endurance when carrying maximum payload of 25 kg), and a service ceiling of 10,000 ft.