The UK Defence Science and Technology Laboratory (Dstl) conducted a public demonstration of the Project Theseus Joint Tactical Autonomous Resupply and Replenishment (JTARR) capability on 12 August, featuring the remote-controlled and autonomous operation of a pair of unmanned ground vehicles (UGVs). 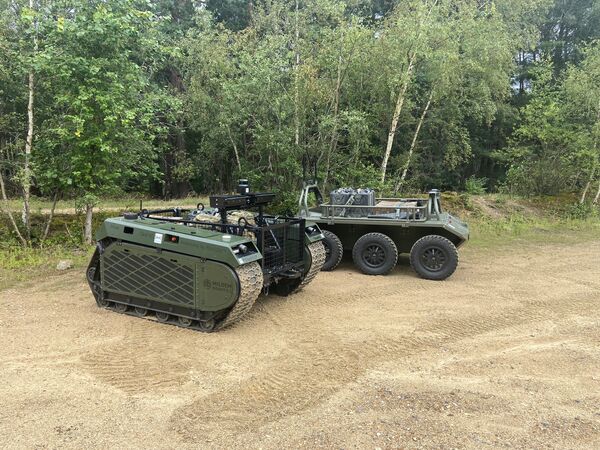 In January 2020 Dstl awarded a pair of contracts totalling over GBP4 million (USD5.5 million) to Horiba Mira and QinetiQ for the procurement of five prototype UGVs purchased under the Theseus transformation fund to support Project Theseus-JTARR.

According to the Ministry of Defence (MoD), Project Theseus aims to “define and deliver an end-to-end, highly automated ground and air resupply network, enabled by a logistics information system; 24/7 and in all conditions”.

“Theseus' main aim is to investigate the potential to apply autonomy to the ordering, planning and delivery of supplies between the requestor (in this case military personnel engaged in warfighting) and the warehouse (in this case a forward operating base). This project should therefore increase the flow and efficiency of delivery on the battlefield at the minimum a 15 km × 15 km area,” MoD documents described before outlining an aspiration to explore a system-of-systems approach.

First announced by the MoD in March 2019, evaluation of Project Theseus UGVs did not start until April 2021 because of delays associated with the Covid-19 pandemic, Dstl's Principal Technical Authority, Guy Powell, told Janes at the demonstration.

The UK Defence Science and Technology Laboratory (Dstl) conducted a public demonstration of the Proj...