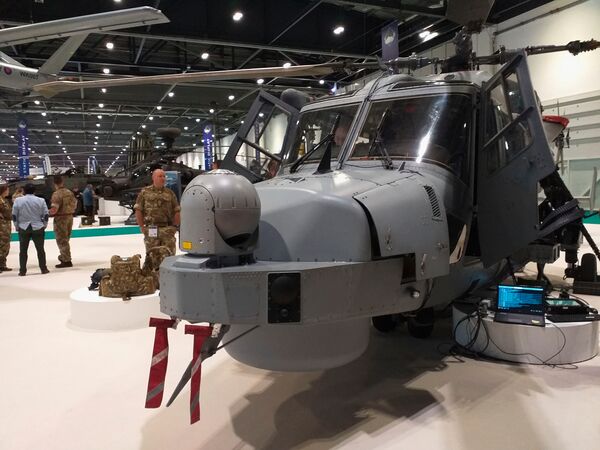 UK Army Air Corps Wildcat AH1 helicopter was on display at DSEI 2021 with a mock-up of a Seaspray 7500E V2 multimode radar fitted under its nose. (Tim Ripley)

A senior AAC officer at the DSEI exhibition in London on 17 September told Janes the initial outcome of the flight trials has been “very positive” and will feed into a wider initiative to enhance surveillance and network technologies employed on the army's Wildcat AH1 helicopters.

The AAC's 1 Regiment displayed a Wildcat AH1 at DSEI with a mock-up of a Seaspray 7500E V2 multimode radar, which is made by Leonardo's UK subsidiary, fitted under its nose.

The trials involved groups of Wildcat AH1s operating over Salisbury Plain Training Area in southern England, with a Wildcat HMA2 flying at high altitude to look for targets using its Seaspray radar's ground moving target indicator and synthetic aperture radar modes. “We would then send a Wildcat AH1 down to positively identify targets using its thermal imaging camera,” said an AAC pilot involved in the trials.

The RN purchased its Wildcat HMA2s fitted with legacy Seaspray radars, but the AAC's Wildcat AH1s were not fitted with the radar as a cost-saving measure.