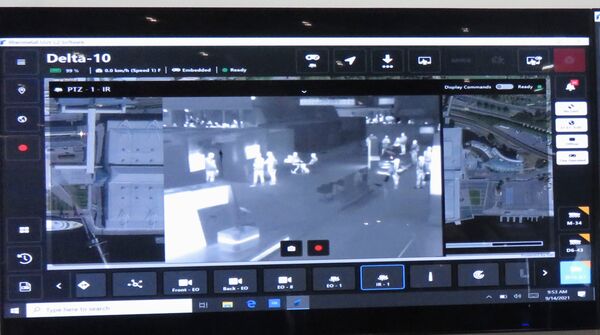 The Rheinmetall digital backbone UGV control network is displayed at DSEI 2021 showing the output from the surveillance vehicle. (Giles Ebbutt)

Rheinmetall Canada has developed a digital backbone to network unmanned ground vehicles (UGVs), allowing them to be controlled by dismounted personnel.

Etienne Rancourt, European business development manager for Rheinmetall Canada, told Janes that the system was designed so that a fleet of UGVs could be controlled from individual tablets.

It has been developed for Rheinmetall's Mission Master UGV range, several variants of which were displayed at the DSEI 2021 exhibition in London, and can be used either for pre-programmed mission or by using remote control.

Rancourt said that control can be exercised either from a specific tablet, which allows the operator to access all the functions of the UGV fleet, or it can be from a battle management system (BMS).

An individual soldier can take control of a UGV using his BMS and can control the devices mounted on the vehicle, both surveillance and kinetic, provided the appropriate permissions are granted. The information from UGVs on the backbone can be available at all levels of command that have access to the BMS, Rancourt said.

Rheinmetall Canada originally developed the system for its proprietary BMS, which is part of the Canadian Army's Integrated Soldier System Project (ISSP). Up to 4,000 units of the ISSP have been supplied to Canadian Army units, Rancourt said.

However, the backbone is agnostic to BMS, communications, and operating systems – both Android and Windows versions. The system has been integrated with the Android Tactical Awareness Kit (ATAK) that is in use with the US Army, Rancourt said. Work is in progress to integrate ATAK and the ISSP BMS, he added.