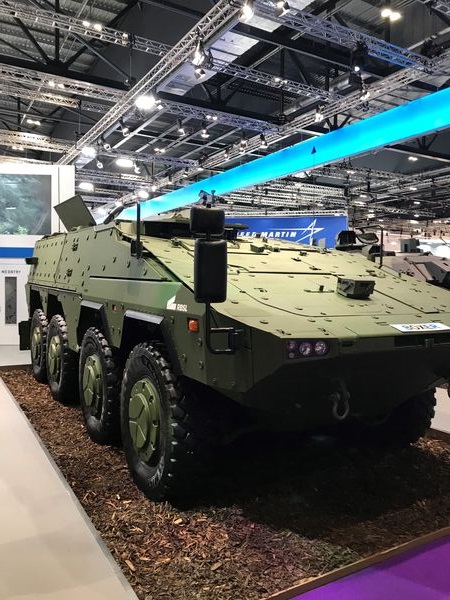 The Boxer mortar module was presented by RBSL and Rheinmetall at DSEI 2021 in anticipation of potential British Army requirements. (Janes/Samuel Cranny-Evans)

Rheinmetall BAE Systems Land (RBSL) and Rheinmetall have unveiled a mortar-carrying mission module for the Boxer 8×8 wheeled armoured fighting vehicle at the 2021 DSEI exhibition held from 14 to 17 September in London.

The module has been designed in anticipation of the potential requirements of the British Army, which is understood to have initially settled for 28 mortar-carrying Boxers out of the 523 vehicles on order. However, those vehicles are expected to operate their mortars in a dismounted role as opposed to the mounted solution presented by RBSL and Rheinmetall.

The physical structure of the module has been developed and manufactured at the RBSL facility in Telford, UK, and production started three months ago, a company spokesperson told Janes on 15 September. The module allows for a vehicle crew of three: a gunner, commander, and driver. The gunner is located at the rear of the vehicle, while the commander and driver at the front. The mortar is fired through two large doors in the mission-module roof.

It is fitted with a Mortar Weapon System 81 (MWS81) from Rheinmetall, which carries a standard L16 81 mm mortar tube that is in service with the British Army. However, if required, the MWS81 could be modified to carry a 120 mm mortar, making it an MWS120.

Images have emerged on Chinese social media platforms showing what appear to be a new prototype or v...
Request Consultation