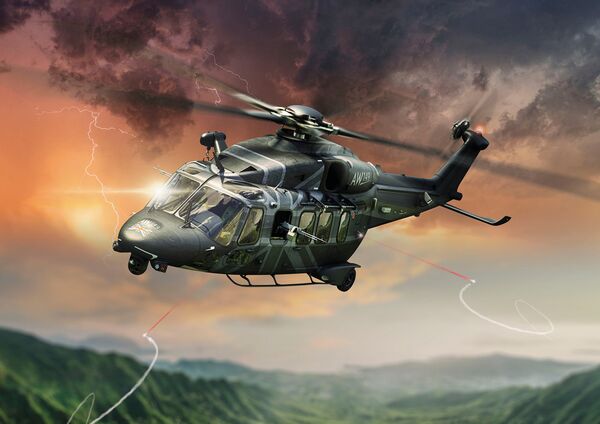 Having previously disclosed its intent to bid the AW149 for the UK's New Medium Helicopter competition, Leonardo has now announced the industrial team it expects to secure the requirement. (Leonardo)

Leonardo has revealed the industrial team that it expects will secure it the UK's New Medium Helicopter (NMH) requirement to replace the Westland-Aerospatiale SA 330E Puma HC2 and three other types.

Announced at the Defence and Security Equipment International (DSEI) 2021 defence exhibition in London on 14 September, Team AW149 comprises a further nine UK-based suppliers that will support Leonardo Helicopters in its bid to supply the UK Ministry of Defence (MoD) with the AW149 from its production facility in Yeovil.

“Leonardo has spotlighted nine of these companies, all of which are supporting the AW149 as ‘the UK choice' for the MoD's New Medium Helicopter requirement. Representing towns and cities from across the UK, from South Shields to Gosport, each company provides a vital component to the AW149 military helicopter, from lights to avionics systems and other hardware and software components,” the company said.

Leonardo has revealed the industrial team that it expects will secure it the UK's New Medium Helicop...