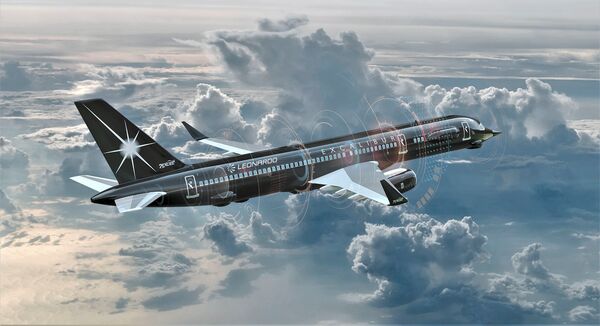 An artist's impression of Excalibur, the 757 flight test aircraft that Leonardo has contracted 2Excel to develop for the Tempest programme. (Leonardo)

Leonardo has progressed the large-body test aircraft it is developing as part of the Team Tempest initiative, contracting 2Excel Aviation to commence the next stage of the flight test aircraft (FTA) programme.

Announced at the DSEI defence exhibition in London on 15 September, the award authorises the UK-based 2Excel to undertake the preparatory work needed to integrate Tempest representative systems aboard the FTA.

“Named ‘Excalibur' after the legendary sword of King Arthur, the aircraft is being modified to supplement the transformational ‘digital-first' approach the Team Tempest partners are taking with regard to the testing and evaluation of Tempest's next-generation electronics,” Leonardo said. “Excalibur will provide the real-world environment necessary for the latter stages of development of the complex, integrated sensors, non-kinetic effects and communications Leonardo is developing. Excalibur will be available to the Tempest international partners to de-risk technology being developed for Tempest and the aircraft could also be used to complement the development of uncrewed technology, including acting as a control hub for uncrewed platforms undergoing test”.

Announced by the UK Ministry of Defence (MoD) at the Royal International Air Tattoo (RIAT) at Royal Air Force (RAF) Fairford in Gloucestershire in July 2019, the Excalibur FTA is a modified Boeing 757 testbed aircraft that will test systems and sensors destined for the future Tempest fighter, as well as supporting capability enhancements for the current Eurofighter Typhoon and Lockheed Martin F-35 Lightning.

UK Secretary of State for Defence Ben Wallace has revealed that his ministry is working to streamlin...